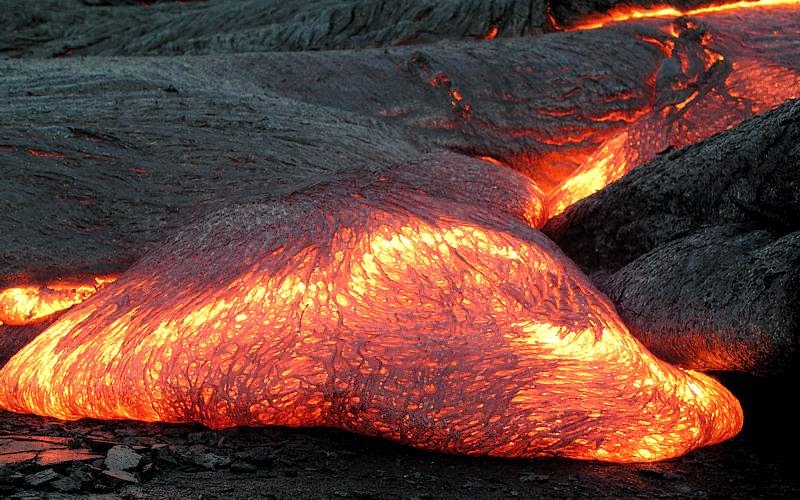 Where do the tremendous amounts of material that are ejected to from huge volcanic calderas during super-eruptions actually originate?


The tremendous amounts of lava that are emitted during super-eruptions accumulate over millions of years prior to the event in the Earth's crust. These reservoirs consist of magma that intrudes into the crust in the form of numerous horizontally oriented sheets resting on top of each other like a pile of pancakes.
A team of geoscientists from Novosibirsk, Paris and Potsdam presents these results in the current issue of Science. The scientists investigate the question on where the tremendous amounts of material that are ejected to from huge calderas during super-eruptions actually originate. Here we are not dealing with large volcanic eruptions of the size of Pinatubo of Mount St. Helens, here we are talking about extreme events: The Toba-caldera in the Sumatra subduction zone in Indonesia originated from one of the largest volcanic eruption in recent Earth history, about 74,000 years ago. It emitted the enormous amount of 2,800 cubic kilometers of volcanic material with a dramatic global impact on climate and environment. Hereby, the 80 km long Lake Toba was formed.
Geoscientists were interested in finding out: How can the gigantic amounts of eruptible material required to form such a super volcano accumulate in the Earth's crust. Was this a singular event thousands of years ago or can it happen again?
Researchers from the GFZ German Research Centre for Geosciences successfully installed a seismometer network in the Toba area to investigate these questions and provided the data to all participating scientists via the GEOFON data archive. GFZ scientist, Christoph Sens-Schönfelder, a co-author of the study explains: "With a new seismological method we were able to investigate the internal structure of the magma reservoir beneath the Toba-caldera. We found that the middle crust below the Toba supervolcano is horizontally layered." The answer thus lies in the structure of the magma reservoir. Here, below 7 kilometers the crust consists of many, mostly horizontal, magmatic intrusions still containing molten material.
New seismological technique
It was already suspected that the large volume of magma ejected during the supervolcanic eruption had slowly accumulated over the last few millions of years in the form of consequently emplaced intrusions. This could now be confirmed with the results of field measurements. The GFZ scientists used a novel seismological method for this purpose. Over a six-month period they recorded the ambient seismic noise, the natural vibrations which usually are regarded as disturbing signals. With a statistical approach they analyzed the data and discovered that the velocity of seismic waves beneath Toba depends on the direction in which the waves shear the Earth's crust. Above 7 kilometers depth the deposits of the last eruption formed a zone of low velocities. Below this depth the seismic anisotropy is caused by horizontally layered intrusions that structure the reservoir like a pile of pancakes. This is reflected in the seismic data.
Supervolcanoes
Not only in Indonesia, but also in other parts of the world there are such supervoclcanoes, which erupt only every couple of hundred thousand years but then in gigantic eruptions. Because of their size those volcanoes do not build up mountains but manifest themselves with their huge carter formed during the eruption – the caldera. Other known supervolcanoes include the area of the Yellow-Stone-Park, volcanoes in the Andes, and the caldera of Lake-Taupo in New Zealand. The present study helps to better understand the processes that lead to such super-eruptions.
reference
K. Jaxybulatov, N.M. Shapiro, I. Koulakov, A. Mordret, M. Landès, C. Sens-Schönfelder (2014): "A large magmatic sill complex beneath the Toba caldera", Science 6209. Vol. 346, pp. 617-619, 31.10.2014; DOI: 10.1126/science.1258582
Share to: