Subduction is the process that takes place at convergent boundaries by which one tectonic plate moves under another tectonic plate and sinks into the mantle as the plates converge. Regions where this process occurs are known as subduction zones. Rates of subduction are typically centimetres per year, with the average rate of convergence being approximately two to eight centimetres per year.

Subduction zones are sites of high rates of volcanism, earthquakes, and mountain building.  Orogenesis, or mountain-building, occurs when large pieces of material on the subducting plate (such as island arcs) are pressed into the over-riding plate or when subhorizontal contraction occurs in the over-riding plate. These areas are subject to many earthquakes, which are caused by the interactions between the subducting slab and the mantle, the volcanoes, and (when applicable) the mountain-building related to island arc collisions. 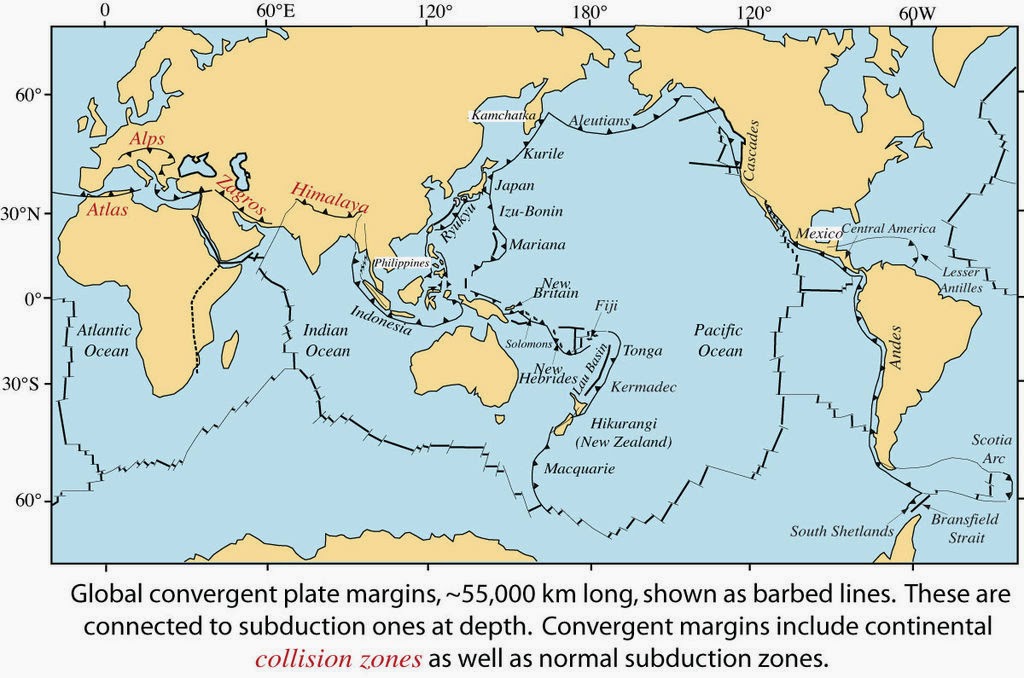 Subduction zones are sites of convective downwelling of Earth's lithosphere (the crust plus the top non-convecting portion of the upper mantle). Subduction zones exist at convergent plate boundaries where one plate of oceanic lithosphere converges with another plate. The descending slab—the subducting plate—is over-ridden by the leading edge of the other plate. The slab sinks at an angle of approximately twenty-five to forty-five degrees to Earth's surface.

This sinking is driven by the temperature difference between the subducting oceanic lithosphere and the surrounding mantle asthenosphere, as the colder oceanic lithosphere is, on average, more dense. At a depth of approximately 80–120 kilometres, the basalt of the oceanic crust is converted to a metamorphic rock called eclogite. At this point, the density of the oceanic crust increases and provides additional negative buoyancy (downwards force).

It is at subduction zones that Earth's lithosphere, oceanic crust, sedimentary layers, and some trapped water are recycled into the deep mantle. Earth is thus far the only planet where subduction is known to occur. Subduction is the driving force behind plate tectonics, and without it plate tectonics could not occur.

The analytic part of the model shows that where two lithospheric slabs of different densities are positioned one next to the other, maximum differential lithostatic pressure would occur at the base of the denser slab directed towards the lighter one. The resulting strain would lead to the rotation of the contact zone between the slabs to dip towards the lighter slab, and the dip would be reduced until offset along the contact zone would be enabled. The parameters that constrain the rotation of the contact zone are known as "Argand Numbers".