What's the Difference Between an Active and Passive Continental Margin? 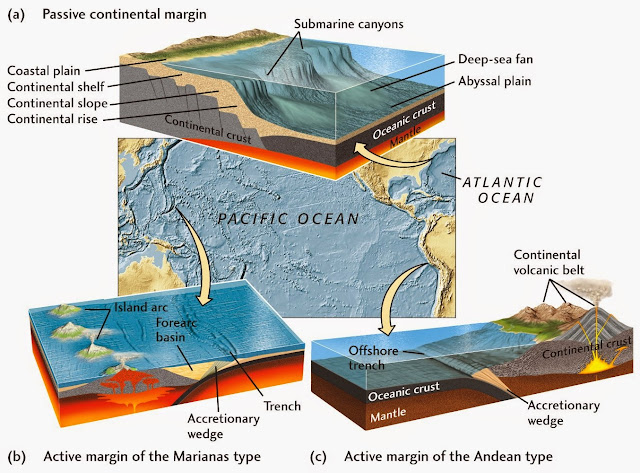 The earth's crust is broken into sections, called plates. There are two (2) basic types:

oceanic plates which are composed of basalt, and continental plates, which are mostly granite. The continental plates are in motion, and literally bounce around on the surface like giant air hockey pucks. The overall rate may be extremely slow (one to ten centimeters per year), but the long term effect is a continual re-shaping of the surface of our planet.

An active continental margin is found on the leading edge of the continent where it is crashing into an oceanic plate. An excellent example is the west coast of South America. Active margins are commonly the sites of tectonic activity: earthquakes, volcanoes, mountain building, and the formation of new igneous rock. Because of the mountainous terrain, most of the rivers are fairly short, and the continental shelf is narrow to non-existent, dropping off quickly into the depths of the subduction trench.


Passive continental margins are found along the remaining coastlines. Because there is no collision or subduction taking place, tectonic activity is minimal and the earth's weathering and erosional processes are winning. This leads to lots of low-relief (flat) land extending both directions from the beach, long river systems, and the accumulation of thick piles of sedimentary debris on the relatively wide continental shelves. Again South America provides a great example. The Amazon River, whose source is in the Andes Mountains (the active margin) drains east across the interior of South America to the coast, where it enters the Atlantic Ocean and deposits the tremendous volume of sedimentary materials it eroded from the continent.

The North American plate also serves to illustrate this difference. The west coast is the active margin, and is the location of earthquakes, volcanoes, and mountains. The Eastern Seaboard is a passive margin, as is the Gulf Coast. These are the low-relief areas of our continent, and are the locations of such exciting places as New Jersey, the Barrier Islands, the swamps of Florida, and the Mississippi delta.
Share to: