Age of the Sahara Desert Revised 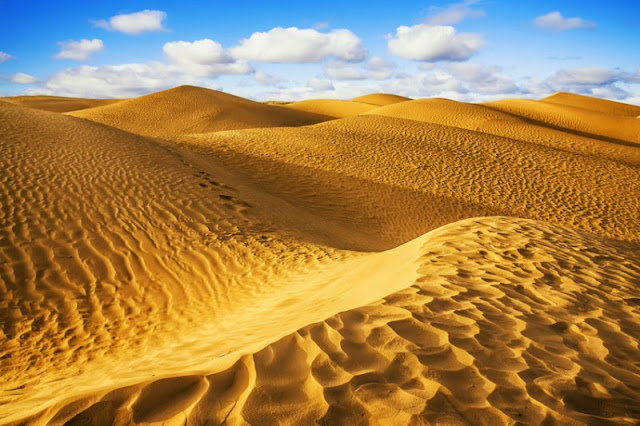 The Sahara is the world's largest subtropical desert. During the last decades, numerous scientific studies have probed its geological and archeological archives seeking to reveal its history. Despite some important breakthroughs, there are still basic questions that lack satisfactory answers.
For example, how old is the Sahara desert? It is widely believed that Sahara desert first appeared during the last 2 to 3 million years, but recent discoveries such as ancient sand dunes and dust records in marine cores push the possible onset of Saharan aridity back in time by several million years. Until now, however, there have been no good explanations for such an early Sahara onset.
This study pinpoints the Tortonian stage (~7-11 million years ago) as a pivotal period for triggering North African aridity and creating the Sahara desert. Using snapshot simulations with the Norwegian Earth System Model (NorESM) model suite, the international team explored the climate evolution of North Africa through major tectonic shifts over the last 30 million years. They found that the region undergoes aridification with the shrinkage of the Tethys -- a giant ocean that was the origin of the modern Mediterranean, Black and Caspian Seas -- during the Tortonian.
The simulations are the first to show that the Tethys shrinkage has two main consequences for North African climate. First, it weakens the African summer monsoon circulations and dries out North Africa. Second, it enhances the sensitivity of the African summer monsoon and its associated rainfall to orbital forcing. The Tortonian stage thus marks the time when North Africa shifted from a permanently lush, vegetated landscape to a landscape experiencing arid/humid cycles on orbital time scales.
Interestingly, these major changes in North African climate and environment are coincident with an important time period for the emergence of early hominids.

The above story is based on materials provided by Uni Research. Note: Materials may be edited for content and length.