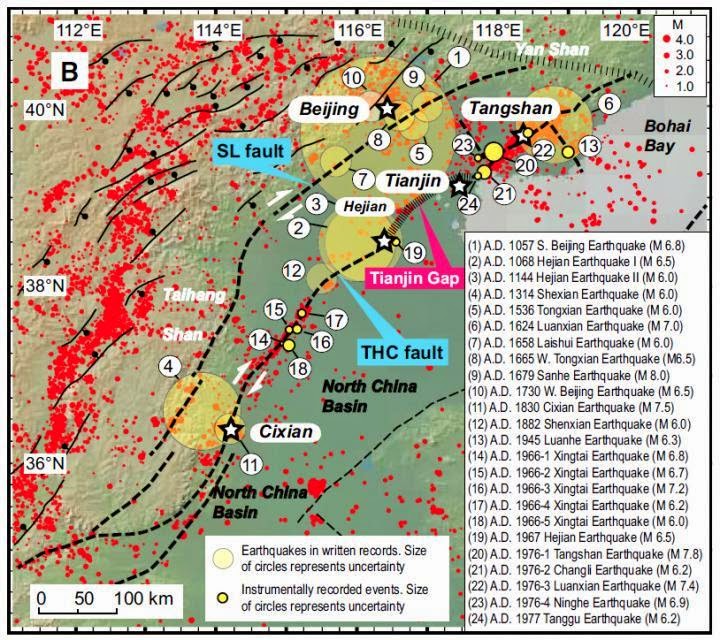 With a population of 11 million and located about 100 km from Beijing (22 million people) and Tangshan (7 million people), Tianjin lies on top of the Tangshan-Hejian-Cixian fault that has been the site of 15 devastating earthquakes in the past 1,000 years. An example of the disastrous events is the 1976 magnitude 7.6 Tangshan Earthquake, which killed a quarter million people.

To assess future seismic hazards along the fault, scientists from the University of California at Los Angeles (UCLA) and the Chinese Earthquake Administration (CEA) have reconstructed, for the first time, a spatial pattern of major earthquakes along the fault. Their reconstruction is based on
(1) detailed analysis of the available instrumental records in the past few decades;
(2) historical records in the past ~4,000 years; and
(3) pre-historical records tracing back nearly 11,000 years.
A surprising finding from this work is the existence of a 160-km seismic gap centered at Tianjin, which has not been ruptured by any major earthquake for more than 8,400 years. As the average earthquake cycle is about 8,700 years, the authors suggest that the 160-km Tianjin fault segment, capable of generating a devastating earthquake similar to the 1976 Tangshan earthquake, may be the next to rupture.