2-  Structure of the oceanic crust 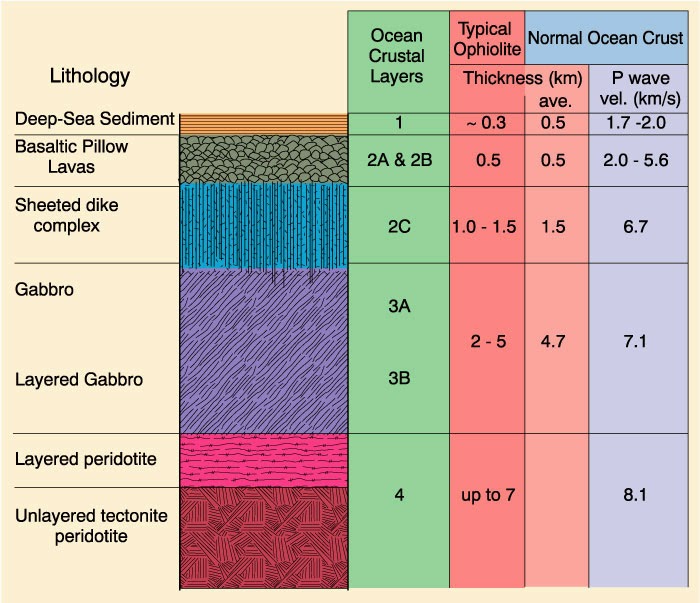 A “typical” oceanic crust (or ophiolitic sequence) is made of four layers:

Mostly tholeitic basalts. Although they are chemically slightly oversaturated (quartz-normative), they typically are olivine-bearing (evidence for crystallization and incomplete crystals separation!).

Differenciation (FC?) is demonstrated by major elements trends, consistent with the formation of Ol, Pg and Px.

This corresponds more or less to the observed petrologic sequence (dunites – gabbros), and to the predicted evolution on a Di-An-Fo diagram (more or less – the diagram predicts Ol-anorthosites which are not observed. Remember, however: it is a simplified system for Mg-rich end members…).

A molten zone is (seismically) observed under the ridges.
Petrology, geochemistry, field evidences (melt veinelets in peridotites) suggest melting of the mantle, immediately below the ridge (shallow melting of a Pg- or Sp-peridotite).

Source and diversity of sources in the oceanic crust

Several types of MORB are observed: , and enriched (N-MORB, E-MORB). E-MORB are richer in LREE and incompatible elements in general.

This suggests several distinct sources; the deeper mantle, regarded as more enriched, is a good candidate for the source of E-MORBs.

Probably minor influx of E-MORB type in a dominantly N type magma chamber at the ridge. Mixing between the two more or less efficient (the more melt, the more efficient – so fast ridges are more mixed, see below).