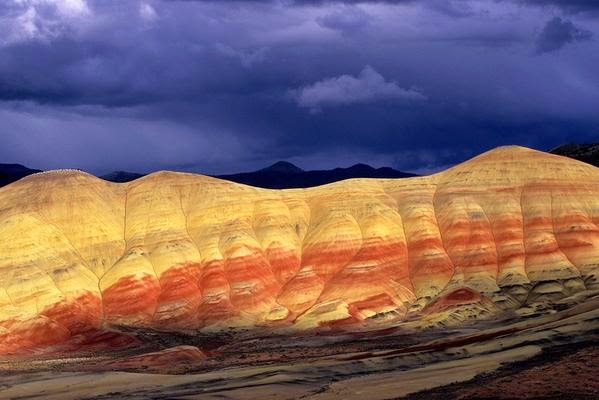 While a rainy climate dominates west of Oregon's Cascade Range, the land east of the mountains is high desert with a drier and colder climate.  The geology of the eastern part of the state is more interesting than the west as most of the rocks are much older.  The John Day Fossil Beds National Monument is a rich complex of different strata that range in ages from the present to around 100 million years ago, and well worth a trip to learn about Oregon's distant past.

The Painted Hills are one of the monument's most notable features.  Located near the small town of Mitchell, they are banded clays from a series of volcanic ash eruptions that formed the Cascades during the Oligocene epoch approximately 32 to 35 million years ago.  These ash-laden clay and shale sediments together make up the Big Basin Formation of the John Day Basin group of geologic layers.  Prevailing winds blew the ash eastward and it deposited in the lowland areas of the basin.

The colored bands represent changes in climate that occurred as they were laid down.  During this period the earth's climate was becoming cooler and drier.  The reddish and yellowish layers consist of laterites, soils rich in iron and aluminum that were created in tropical climates with a distinct wet and dry season.  Red soils come from a more tropical period, while the yellows are from a drier and cooler time.  Dark black dots and streaks in the hills are stains from manganese nodules, likely the work of plants that fixed the mineral or from salts that became concentrated as pools of water rich in the mineral dried up. 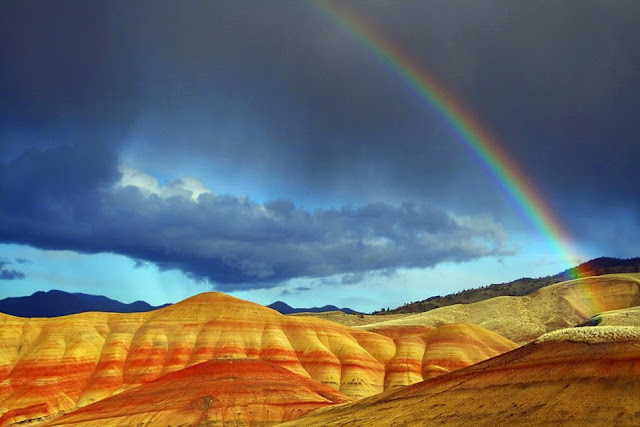 As softer and more recent soils eroded, the hills were exposed to create a wondrous landscape. On a late spring day, Bob Strebin and I arrived to see the area and photograph the hills. At lunchtime the sky was clear and bright.
The rain intensifies the colors in the hills, so this was the perfect setup for an extraordinary photo.  What you see here is a combination of the two sheets of film, Provia with its wider exposure latitude captured the clouds and Velvia 100F provided more brilliant reds and yellows in the hills. 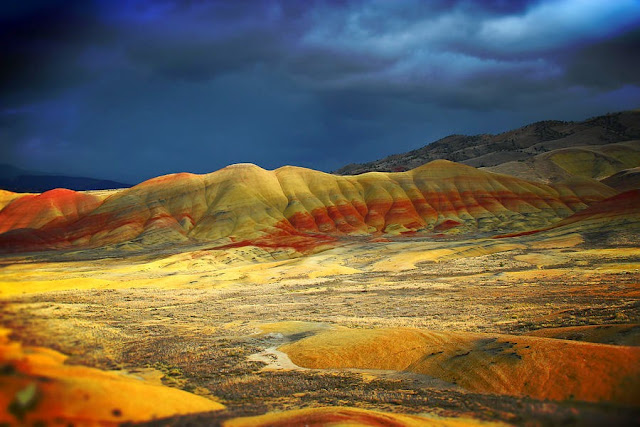