Carbonate, Geology, sedimentary 12:07 AM
A+ A-
Print Email 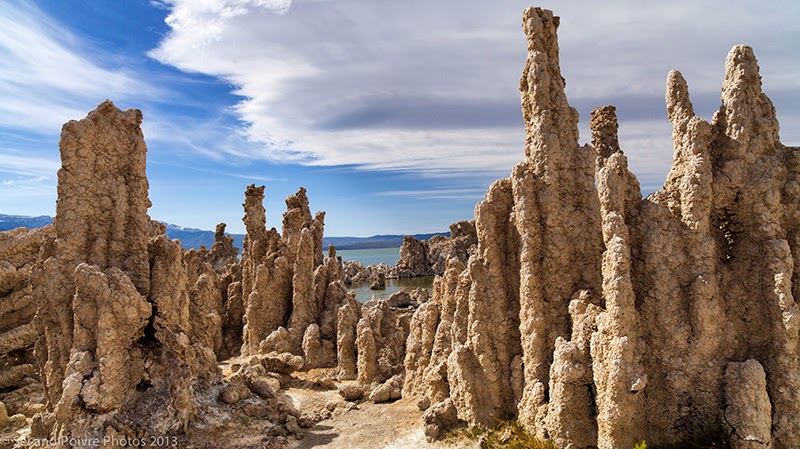 Non-marine carbonates originate in terrestrial and aquatic environments without marine influence. These carbonates, formed by abiotic and/or biotic processes differ in many aspects from marine carbonates, which are much better known to geologists.

Terminology: The term pedogenic refers to soil genesis. Most pedogenic carbonates are formed withn soils rich in calcium carbonate. The termpaleosol describes 'a buried soil horizon of the geologic past' but is often used in a broader sense, embracing various descriptive terms associated with horizons of subaerial exposure (e.g. caliche). Important processes are chemical and physical weathering of host carbonate rock, soil development and accumulation of calcium carbonate within the soil by evaporation of saturated porewaters driven to the surface by capillary forces.

These processes may result in a physicochemically and microbially controlled formation of hard crusts on the surface or in the upper horizon of soils (duricrusts). Depending on climatic conditions and the host substrate, the duricrusts consist  of carbonate (forming calcretes or dolocretes) or other mineral phases (e.g. silica forming silcretes, gypsum -> gypscretes, hematite and goethite -> ferricretes).

The following discussion is limited to near-surface accumulations of calcium carbonate (Low-Mg calcite) in terrestrial, alternating wet settings, generally called calcrete or caliche. These distinctive carbonates result from multiple processes induced by life, climate and exchange between mineral phases: 'Calcrete' was proposed for calcareous-cemented deposits in Africa, the roots of the word caliche areLatin, meaning lime and limestones . Calcrete and caliche are used synonymously or separately (calcrete in order to describe highly indurated parts of caliche profiles).

Critical factors in the formation of caliche are (1) climate (a significant net annual moisture deficit in the soil; control on dust accretion caused by dust storms), (2) topography, (3) vegetation, (4) presence of carbonate and oxalic phases, (5) carbonate content, texture, porosity and permeability of the hosting substrate (ThCriault and Desrochers 1993), (6) action of microorganisms as well as (7) exposure time (which may range between a few tens of thousands, as shown by Holocene calcretes, and millions of years as suggested by Carboniferous calcretes).

Palustrine limestones are deposits of shallow freshwater environments exhibiting extensive evidence of pedogenic modification. These carbonates are common in many ancient continental and marginalmarine sequences. The term (derived from 'paludal', meaning marshy or swampy) was first proposed while describing late Cretaceous-Early Tertiary limestones in southern France.
Palustrine carbonates were originally considered as near-shore deposits of extremely shallow lakes with oscillating lake levels and densely vegetated shorelines.
Because of a very low relief on the lake bottom, fluctuation in the water table should result in an interbedding of lacustrine facies (characterized by the occurrence of specific fossils), and pedogenic facies (characterized by textures which indicate a pedogenic overprint of dried-out parts of shores).

This interpretation presents problems since many palustrine limestones are not associated with lake deposits. A suitable modern analogue for a palustrine environment may be the freshwater carbonate marshes of the interior Everglades in Florida . Seasonal variations in water depth and minor topographic variations across the area could explain the association of soil and calCrete criteria with dissolution features (pseudomicrokarst), and the presence of sublittoral carbonates which were formed in perennial shallow lakes within the wetland. 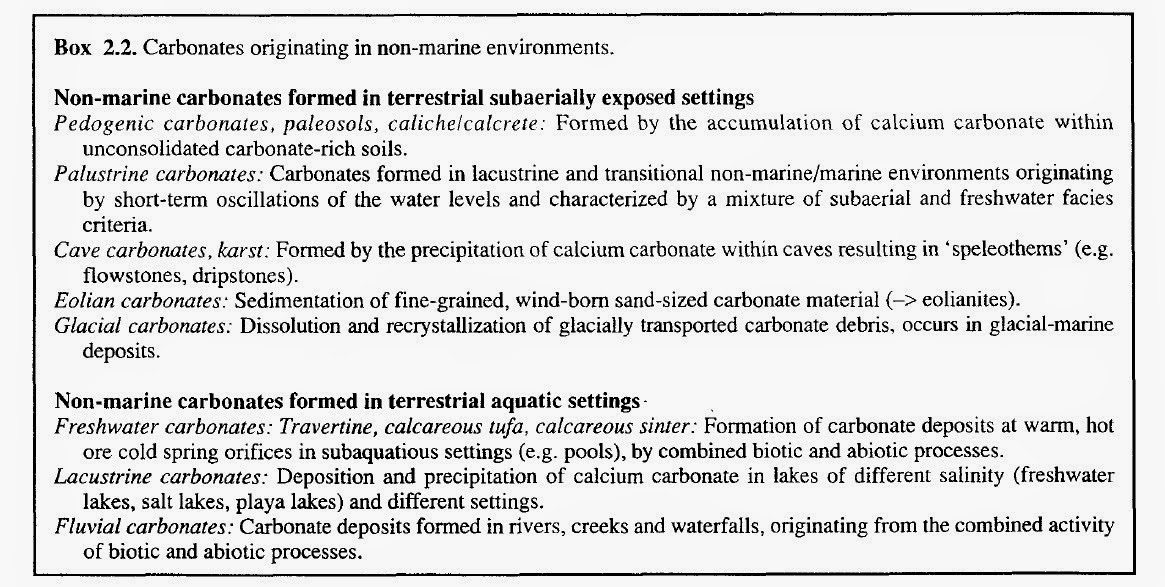 Terminology: The term karst refers to physical structures formed by dissolution from meteoric waters. It includes 'all of the diagenetic features - macroscopic and microscopic, surface and subterranean - that are produced during the chemical dissolution and associated modification of a carbonate sequence. Karst develops (a) at the air-limestone or soil-limestone interface ('surface karst') and (b) within carbonate bodies ('subsurface karst').

Diagnostic features: Surface karst or exokarst is characterized by surface solution or corrosion features comprising small-scale and large-scale criteria (microkarst, residual paleosols, karren, solution pans or kamenitzas, and dolines or sinkholes). Large-scale geomorphological features (e.g. karst valley and karst towers) are responsible for characteristic landforms. Subsugace karst is represented by caves and vugs formed above, at and below the water table.

Caves contain (a) secondary mineral deposits (porous calcareous tufa: moonmilk, and hard crystalline
sinter or speleothems) precipitated by vadose and shallow phreatic waters and (b) internal cave sediments and karst breccia caused by the collapse of caves. Karst breccias exhibit a wide variety of internal composition depending on the site and the mode of origin.

Speleothems are precipitated from thin water films flowing over the rock and forming flowstones and dripstones, or in pools of water, forming 'cave pearls' Dripstones include stalagmites and stalactites as well as finely curved twiglike structures (helictites). Carbonate sinters are made up of calcite with various amounts of Mg, and/or aragonite, dolomite and rarer minerals. The mineralogical composition is often seasonally controlled; it depends on the MgICa ratio of the percolating pore-fluids, pC02, and evaporative conditions within the cave.

Terminology: The term eolianite has been coined for bioclastic wind-borne deposits that make up more than 90% of the Pleistocene deposits of Bermuda. The term is now used for eolian sands that have been cemented by calcium carbonate in a subaerial environment.
The coalescence of dunes results in linear ridges with large cross-bed sets which may stand a few tens of meters above the source beach. Glacial, interglacial and Holocene eolian carbonate dune deposits are known from Bermuda, the Bahamas, northeast Yucatan, California, the Trucial Coast, the Meditenranean and western Australia. Generally modem eolianites are associated with coastal marine
deposits and pedogenic carbonates. Wind can transport carbonate particles (ooids, microfossils) over wide distances (e.g. from Africa to the Caribbean).

Enigmatic calcite pseudomorphs, known as glendonites and interpreted as pseudomorphs after ikaite, a metastable hexahydrate of calcium carbonate, were reported from some modem as well as ancient glaciomarine environments. Ikaite occurs in morgenstem-like and stellate aggregates, several centimeters in size, and indicates sub-zero temperatures at the seafloor. Glendonites are typically found in cold-water deposits dating from the Precambrian to the Pleistocen.