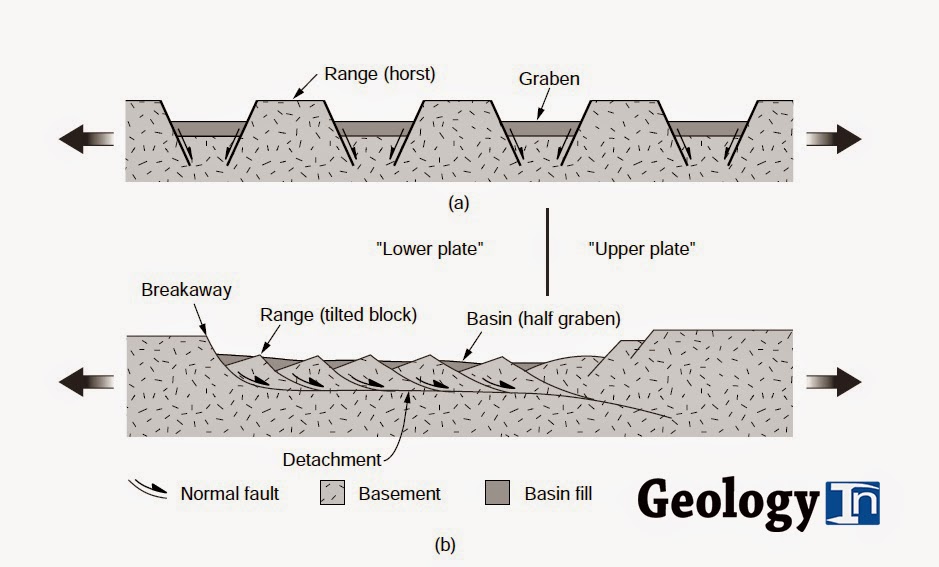 Geometry of normal fault arrays, in cross section. (a) Parallel rotational faults.
Before faulting (top), the faults are parallel and not curved. After faulting (bottom), fault blocks are tilted. In reality, crushing and small-scale faulting at the base of the blocks fill the gaps. (b) Listric faults and associated unfaulted rollover. Before faulting (top), the faults shallow with depth and merge with a detachment. After faulting (bottom), the blocks have moved. The block to the right curves down to maintain contact with the footwall, forming a rollover anticline.

Accommodation zones Normal fault systems are not continuous along the length of a rift. Rather, rifts are divided intosegments, whose axes may be offset from one another. Further, the faults of one segment may dip in the opposite direction to the faults of another segment. An accommodation zone is the region of complex structure that links the ends of two rift segments. Accommodation zones typically include strike-slip faults.

Active margin A continental margin that coincides with either a strike-slip or convergent plate boundary, andthus is seismically active.


Aulacogen An unsuccessful rift that cuts across a continental margin at a high angle to the margin. Typically, aulacogens transect the grain of an orogen that borders the margin. Aulacogens may represent failed arms of three-armed rifts, or they may simply be older rifts (formed long before the development of the continental margin, during an earlier episode of rifting at a different orientation) that were cut off when the margin formed .

Axis (of rift or MOR) The center line along the length of a rift or a mid-ocean ridge (MOR). The trend of the axis is the overall trend of the rift.

Graben A narrow, symmetric trough or basin, bounded on both sides by normal faults that dip toward
the center of the trough.

Half graben An asymmetric basin formed on the back of a tilted fault block; one border of the basin is a normal fault.

Horst An elongate, symmetric crustal block bordered on both sides by normal faults; both faults dip
away from the center of the horst.

Midocean ridge The elongate submarine mountain range that is the bathymetric manifestation of a divergent plate boundary. Though some midocean ridges (e.g., the Mid-Atlantic Ridge) do lie in the center of ocean basins, some (e.g., the East Pacific Rise) do not. Therefore, some geologists use the
term “oceanic ridge” in place of “mid-ocean ridge” for these features.

Oblique rifting Rifting that occurs where the stretching direction is at an acute angle to the rift axis.
Passive margin A continental margin that is not a plate boundary and, therefore, is not seismically active. It is underlain by the relict of a successful rift. The rift relict subsides and is buried by a thick wedge of sediment.

Rift (rift system) A belt of continental lithosphere that is undergoing, or has undergone, extensional deformation (i.e., stretching); also called a continental rift.

Rift–drift transition The time at which active rift faulting ceases and seafloor spreading begins (i.e., the time at which a mid-ocean ridge initiates, and the relicts of a rift become the foundation of a passive margin).

Rifting The process by which continental lithosphere undergoes extensional deformation (stretching)
by the formation and activity of normal faults.
Rotational normal fault A normal fault whose hanging wall block rotates around a horizontal axis during slip.

Subsidence The sinking of the surface of the lithosphere. Subsidence produces sedimentary basins. For example, the relict of a successful rift subsides to form a passive-margin basin.
Successful rift A rift in which stretching has proceeded until the continent cut by the rift ruptures to form two pieces separated by a new mid-ocean ridge.

Transfer fault A dominantly strike-slip fault that links two normal faults that are not coplanar; some transfer faults serve as accommodation zones.

Unsuccessful rift A rift in which extensional deformation ceased prior to rupture of the continent that was cut by the rift.