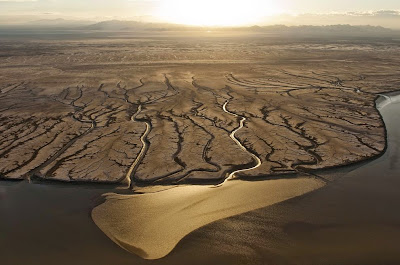 The engineered spring flood that brought water to previously dry reaches of the lower Colorado River and its delta resulted in greener vegetation, the germination of new vegetation along the river and a temporary rise in the water table, according to new results from the binational team of scientists studying the water's effects.


The experimental pulse flow of water was the result of a U.S.-Mexico agreement called Minute 319.

"The pulse flow worked," said Karl W. Flessa, co-chief scientist for the Minute 319 Science Team. "A small amount of water can have a big effect on the delta's ecosystem."

Starting March 23, 2014, and ending May 18, approximately 105,392 acre-feet (130 million cubic meters) of water was released into the dry river bed below Morelos Dam, which straddles the U.S.-Mexico border just west of Yuma.

"The groundwater was recharged, vegetation got greener than previous years and the water helped germinate new native vegetation," said Flessa, a University of Arizona professor of geosciences. "As a bonus, the river reached the sea."

In addition, people living along the river benefited, he said.
"People in the communities along the river were just overjoyed to see their river again," he said. "When the surface water was there, people celebrated. Kids who'd never seen water in the river before got to splash in it."

The science team includes more than 21 scientists from universities, government agencies and nongovernmental organizations from both Mexico and the U.S, including the UA, the Universidad Autónoma de Baja California, the U.S. Geological Survey, the U.S. Bureau of Reclamation, The Nature Conservancy, the Tucson-based Sonoran Institute and the Ensenada-based Pronatura Noroeste.

Flessa will present the team's findings at his talk, "The Science and Policy of the First Environmental Flows to the Colorado River Delta," on Thursday, Dec. 18 at 3:10 p.m. in Moscone South Room 308 as part of the American Geophysical Union's annual meeting in San Francisco.

Although most of the water soaked into the ground in the 37 miles (60 km) below the dam, the river's surface flow reached areas farther downstream that had been targeted for restoration. The increase in groundwater revived vegetation along the entire 83-mile (134 km) route to the sea.

By comparing Landsat 8 satellite images from August 2013 with those from August 2014, team members calculated a 23 percent increase in the greenness of riparian zone vegetation.

Although the groundwater did eventually recede, the surface water caused the germination of new willows and cottonwoods. Those plants germinate after natural spring floods, and their roots can grow fast enough to keep up with the receding water table.
The surface water reached the restoration sites prepared by the Sonoran Institute and Pronatura Noroeste and helped establish native vegetation.

"So long as the roots get down into the permanent water table, then you have established a new bunch of trees that will then live for 20, 30, 40 years," Flessa said. "Those trees will attract birds."

The scientists already observed an increase in the numbers of birds, he said.
Learning where the newly germinated plants survived past the first summer will help the researchers figure out where ecosystem restoration will do the most good using the least amount of water, he said.

"The water that soaked into the ground is also good for the farmers," Flessa said. "It raises the water table and they pump that water -- so this isn't just about trees and birds."
The team will continue to monitor the lower Colorado River Delta's vegetation and hydrological response to the pulse flow, including the long-term effect on groundwater. They will also study how the new vegetation affects both resident birds and those migrating along the Pacific Flyway.

The five-year program to monitor the environmental results of the pulse flow is being supported by government agencies and environmental groups in both countries, under the auspices of the International Boundary and Water Commission.

The Minute 319 pulse flow is part of a five-year agreement (2012-17) adopted by the International Boundary and Water Commission, under the framework of a 1944 U.S. - Mexico treaty that governs water allocations on the Colorado River between the two countries.

The agreement provides multiple benefits for Colorado River water users in both countries, including environmental flows to the delta. Minute 319 identifies criteria for sharing of future water shortages and surpluses between the two countries, allows storage of Mexican water in Lake Mead and supports improvements to Mexican irrigation infrastructure.

"Another pulse flow would require a new agreement, because Minute 319 calls for only one pulse flow within the five-year term of the minute," Flessa said. "We hope the results of this pulse flow encourage the negotiators to make this happen again."

The above story is based on materials provided by University of Arizona.
Share to: