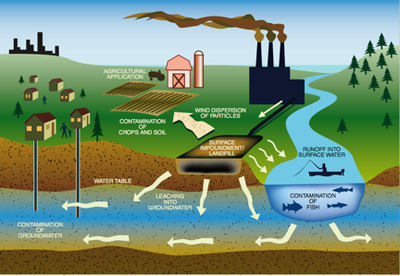 Duke University scientists have developed new forensic tracers to identify coal ash contamination in water and distinguish it from contamination coming from other sources.
"These new tools can be used by federal and state regulatory agencies to monitor the environmental effects of coal ash and determine whether it has or hasn't impacted the environment," said Avner Vengosh, professor of geochemistry and water quality at Duke's Nicholas School of the Environment. "They can be used to trace the coal ash effluents to their source, even in watersheds where there are multiple possible sources of contamination."
Previous methods to identify coal ash contaminants in the environment were based solely on the contaminants' chemical variations, he said. The newly developed tracers provide additional forensic fingerprints that give regulators a more accurate and systematic tool.
The tracers, which have been tested both in the laboratory and the field, are based on the distinctive isotopic and geochemical signatures of two elements, boron and strontium, found in coal ash effluent.
"The isotopic signature of boron coming from coal ash is always different from naturally occurring boron or boron from other sources," said Laura S. Ruhl, assistant professor of earth sciences at the University of Arkansas at Little Rock. "The signature of strontium is not always distinct, but when used together, the two tracers provide definitive evidence if the contamination is coming from coal ash or another source."
Ultimately, Ruhl said, she hopes the tracers can help companies and regulatory agencies identify safer ways to store and dispose of coal ash.
The study comes at a time when the U.S. EPA has submitted a proposal to the Office of Management and Budget to restrict coal ash disposal into the environment and, for the first time, establish federal regulations to govern how the ash is stored and disposed.
Vengosh and Ruhl published their findings this week in the peer-reviewed journal Environmental Science & Technology.
To test the tracers' reliability, the researchers conducted three types of experiments.
First, they collected samples of coal ash from three U.S. coal-producing regions - the Appalachian, Illinois and Powder River basins - and conducted lab tests to simulate what would happen in nature if the samples were leached and released into nearby waters. Each sample's leached solution was measured to characterize its isotopic fingerprints of boron and strontium.
Next, they collected effluents from coal ash facilities at power plants in North Carolina and Tennessee and compared it to both coal ash residue they had previously collected at the site of the massive 2008 Tennessee Valley Authority power plant spill in Kingston, Tenn., and to the laboratory test results.
The tests showed that the isotopic signatures of coal ash from all sources matched.
A third round of tests on water and sediment samples collected in lakes and rivers downstream from coal ash ponds in North Carolina yielded further confirmation. The tracers clearly showed that the fingerprints of boron and strontium in these samples matched the unique composition of coal ash and were different from those in samples from lakes and rivers unaffected by coal ash contamination.
"The tests confirm that we have generated new tracers that allow us to identify coal ash contaminants in the environment and delineate them from contaminants from other sources in the same watershed, including hydraulic fracturing," Vengosh said. "This is critical for protecting the environment and providing scientific evidence to help settle public debates on issues such as the environmental effects of coal ash or hydraulic fracturing."

The above story is based on materials provided by Duke University.
Share to: