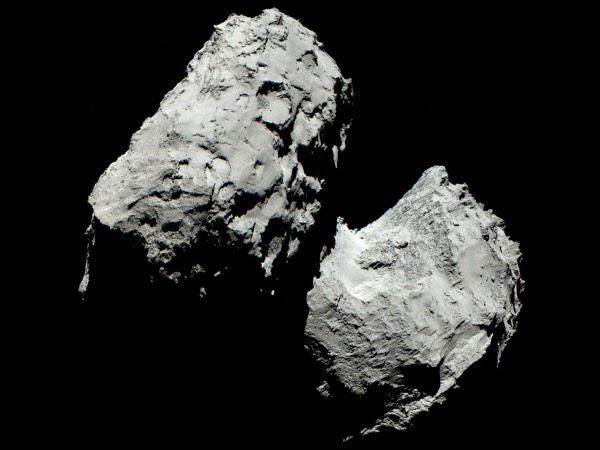 There are places on comet 67P/Churyumov-Gerasimenko where cauliflowerlike textures appear in the dusty crust, like goose bumps under the skin. Scientists using the Rosetta spacecraft—which arrived at 67P in August and became the first mission to orbit and land on a comet—now think they may have discovered the source of these patterns on cliff faces and in deep pits: layer upon layer of rounded nodules, 1 to 3 meters across. These spherules, dubbed dinosaur eggs, could be the fundamental building blocks that clumped together to form the comet 4.5 billion years ago.

“These could be those little cometesimals,” says Holger Sierks, principal investigator for Rosetta’s science camera and a planetary scientist at the Max Planck Institute for Solar System Research in Göttingen, Germany. Sierks presented the findings here yesterday at a meeting of the American Geophysical Union.

In trying to understand how comets, asteroids, and planets were built from microscopic pieces of dust whirling around the protoplanetary disk, modelers have a problem they call the “aggregation barrier.” It is relatively easy to get small pieces of dust to stick together, because of electrostatic forces and van der Waals forces (tiny forces arising from the polarity of molecules). But once these clumps get much bigger than a centimeter, high-speed collisions result in disintegrations rather than bigger clumps. So modelers have had to come up with ways to get these centimeter-sized clumps to cluster together into the larger objects that eventually become comets. There is some evidence that small clumps are the fundamental building blocks: Many asteroids are made of chondrules, small beads on the scale of a centimeter or less.

That’s one reason why Carey Lisse is so surprised by the Rosetta observations. “I was hoping to see marbles everywhere,” says Lisse, an astrophysicist at the Johns Hopkins University Applied Physics Laboratory in Laurel, Maryland. “We’re getting not marbles but dinosaur eggs. They’re about a factor of 10 to 100 bigger than predicted.” Lisse suggests that, upon closer inspection, the dinosaur eggs could actually be composed of smaller marblelike units. Or perhaps, he says, formation models need to be adjusted to make it easier for larger building blocks to grow in the outer solar system where comets form and where ice and organic molecules could assist in the sticking.

But some scientists are still skeptical. Horst Uwe Keller, a planetary scientist at the Technical University of Braunschweig in Germany, and the former principal investigator for the Rosetta camera, says that it is too early to say whether the dinosaur eggs are truly fundamental building blocks. He notes that there are many deep pits on 67P where the texture is not found. And, he says, it is possible that the patterns could arise through some process of sublimation, in which sunlight can alter the comet surface by turning on jets of gas and dust. “The images are very striking,” he says. “But we don’t understand them.”