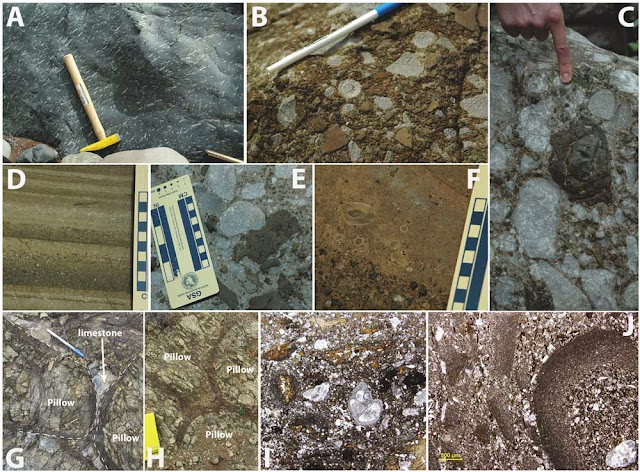 (a) pyroclasts, i.e., pyroclastic fragments that include juvenile (fresh) lumps of lava and glass (pumice or scoria) which fragment to give glass shards.
(b) crystals (phenocrysts), especially of quartz and feldspar.
(c) lithic fragments consisting of pieces of lava from earlier eruptions (non-juvenile) and of country rock.

The components of volcaniclastic deposits are given in Table  Pyroclastic deposits are often emplaced at high temperatures. Recognition features include carbonised wood, pink/red coloration due to thermal oxidation, dark coloration due to finely disseminated microlites of magnetite, radial cooling joints, gas-escape structures (including fossil fumarole pipes, vertical structures a few centimetres in width filled with coarse ash), welding together of grains, and streaked-out and flattened pumice fragments.


On the basis of grain-size, the pyroclasts are divided into ash, lapilli, blocks and bombs (Table). The term pumice refers to light-coloured vesicular glassy rock of rhyolitic composition, and scoria is used for darker pieces, still vesicular, generally of andesitic or basaltic composition. Pumice has a low density and can float on water. The vesicles in these lava fragments may be filled with calcite (clear), zeolite (white) or clay minerals (green). Accretionary lapilli are small, con centrically laminated spheres, 2– 20 mm in diameter (like ooids), of fine volcanic ash, in some cases around a nucleus of a coarse ash grain. They commonly formed in wet (phreatic or phreatomagmatic) eruption columns and by fallout from steamrich plumes.

Volcanic bombs are common in volcaniclastic successions and consist of large, usually rounded, randomly distributed ‘blobs’ of lava, which may depress or rupture the bedding (bomb sags), or be deformed into strange shapes if they were still soft when they landed. Based largely on shape, spindle, bread-crust and cow-dung bombs can be distinguished. 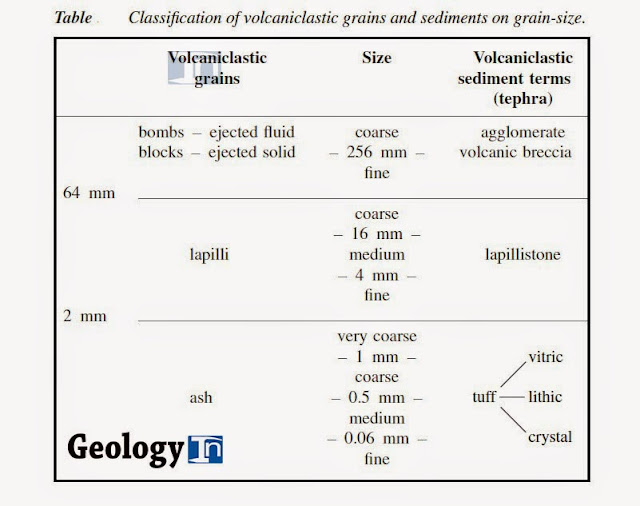 Three modes of transport can be distinguished: pyroclastic flow, pyroclastic surge, and pyroclastic fall. During Plinian eruptions, pumice and ash are formed when silicic magma is fragmented in the volcanic conduit, because of decompression and the growth of bubbles. Pyroclasts are then entrained in a buoyant eruption plume which can rise several kilometers into the air and cause aviation hazards.

Particles falling from the eruption clouds form layers on the ground (this is pyroclastic fall or tephra). Pyroclastic density currents, which are referred to as "flows" or "surges" depending on particle concentration and the level turbulence, are sometimes called glowing avalanches. The deposits of pumice-rich pyroclastic flows can be called ignimbrites.