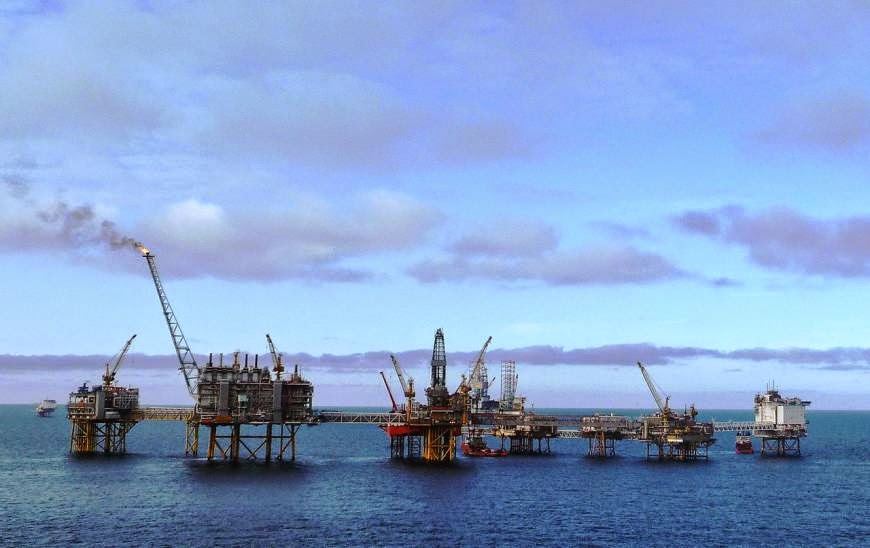 A technology developed by Stanford scientists for passively probing the seafloor using weak seismic waves generated by the ocean could revolutionize offshore oil and natural gas extraction by providing real-time monitoring of the subsurface while lessening the impact on marine life.
"We've shown that we can generate images of the subsurface nearly every day instead of taking snapshots just two or three times a year," said Biondo Biondi, professor of geophysics at Stanford's School of Earth Sciences.
Currently, many energy companies use a technique called time-lapse reflection seismology to monitor offshore oil and gas deposits to optimize production and look for hazards such as hidden gas pockets. Reflection seismology involves ships towing arrays of "air guns" that explode every 10 to 15 seconds to produce loud sound pulses. The pulses bounce off the seafloor and geological formations beneath, then journey back to the surface, where they are recorded by hydrophones. The data are then deciphered to reveal details about subsurface structures.
Each survey can cost tens of millions of dollars, and as a result they are only conducted two to three times a year. Environmental groups and marine biologists have expressed concerns about the use of air guns for contributing to noise pollution in the ocean that can disturb or even injure marine animals, including humpback whales and giant squid.
The new technique developed by Biondi and Sjoerd de Ridder, a student of Biondi's who is now a postdoctoral scientist at the University of Edinburgh, is different. It exploits naturally occurring seismic waves generated by Earth's oceans that are several orders of magnitude weaker than those produced by earthquakes.

As ocean waves collide with one another, they create pressures on the sea floor, where they generate seismic waves that then propagate in every direction. Scientists have known about this "ambient seismic field" for nearly a century, but it was only recently that they understood ways to harness it.
"We knew the ambient seismic energy was there, but we didn't know what we could do with it," De Ridder said. "That understanding has only been developed in recent years. Our technique provides the first large-scale application to harness it for oil and gas production."
The technique that Biondi and De Ridder developed, called ambient seismic field noise-correlation tomography, or ASNT, uses sensors embedded in the seafloor. The sensors, which are typically installed by robotic submersibles, are connected to one another by cables and arranged into parallel rows that can span several kilometers of the seafloor. Another cable connects the sensor array to a platform in order to collect data in real time.
The sensors record ambient seismic waves traveling through Earth's crust. The waves are ubiquitous, continuously generated and traveling in every direction, but using careful signal-processing schemes they developed, Biondi and De Ridder can digitally isolate only those waves that are passing through one sensor and then another one downstream. When this is done repeatedly, and for multiple sensors in the network, what emerges is a "virtual" seismic wave pattern that is remarkably similar to the kind generated by air guns.

Because the ASNT technique is entirely passive, meaning it does not require a controlled explosion or a loud air gun blast to create a seismic wave signature, it can be performed for a fraction of the cost of an active-reflection-seismology survey and should be far less disruptive to marine life, the scientists say.
Since 2007, Biondi and De Ridder have been testing and refining their technique in a real-world laboratory in Europe. The scientists worked with the energy companies BP and ConocoPhillips to study recordings from existing sensor arrays in the Valhall and Ekofisk oil fields in the North Sea that are capable of recording ambient seismic waves.
The proof-of-concept experiment has been successful, and the scientists have demonstrated that they can image the subsurface at Valhall down to a depth of nearly 1,000 feet. "We've now shown that our technique can very reliably and repeatedly retrieve an image of the near-surface," De Ridder said. "Our hope is that they can also reveal changes in the rocks that could signal an impending problem."
The Stanford scientists outlined their technique and detailed some of their results from Valhall, as well as from Ekofisk, in a series of technical papers, the latest of which was recently published in the journalGeophysical Research Letters.

The above story is based on materials provided by Stanford University.
Share to: