The Chemical Composition of Gems & Minerals 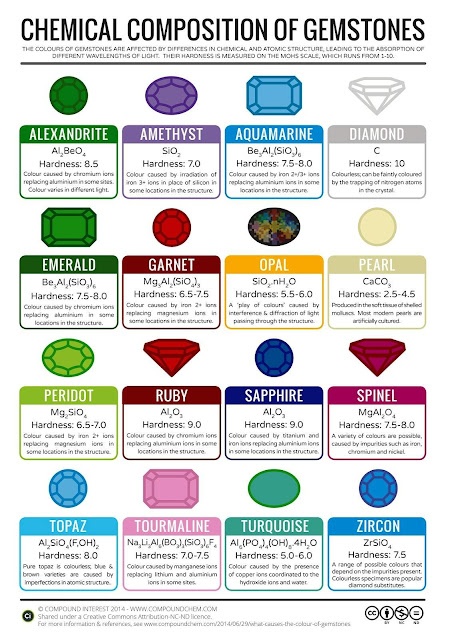 Nearly all minerals are soluble in water. But most dissolve to such a limited extent as to go almost unnoticed. A liquid is called a solvent when it's action on a solid substance is to break apart the atoms of the crystal structure, thus dissolving it.

With some minerals, not all the atoms in the crystal structure are taken into solution. The two specimens at the lower left illustrate this phenomenon for the mineral muscovite. Fresh crystals in one specimen contrast with the other, to its right, which look somewhat faded.

If the fresh looking sample were subjected to running water, potassium atoms originally present in the layered structure would dissolve, and the muscovite would gradually change from a mica to a clay minerals. Such is the mineral illite, the faded-looking sample.

In the series of mineral groups displayed on the right side of this case, different specimens show variations in chemical properties. The top group represents the range of temperatures at which the minerals will melt or change to a liquid. The melting point is also known as the fusing temperature.

Minerals composed of atoms that are not tightly bonded within the crystal structure will melt at relatively low temperatures. However, much heat may be needed to break the chemical bonds of other minerals.

The mineral quartz, for example, will only melt above 1,610 degrees Celsius, or 2,930 degrees Fahrenheit. The next group of minerals are not found in areas of high rainfall or high humidity because these minerals dissolve easily in water. Thus, a desert region, such as Death Valley, would be an ideal place for these minerals to form.

Water is not the only liquid which will dissolve minerals. Several minerals, especially some of the carbonates, will dissolve readily in dilute hydrochloric acid. When that happens, a chemical reaction releases carbon dioxide gas.

The resulting bubbling, or effervescence, is a useful aid in identifying some of the more readily soluble carbonates, such as calcite, calcium carbonate, specimen number 12, which is found in limestones, and of which seashells are made.

The next group of minerals show another kind of solution quite common among minerals. This is called solid solution, in which two or more chemical compounds share the same crystal structure, forming a homogeneous crystalline substance. A mineral which belongs to such a solid solution has no single fixed chemical composition.

Rather, its composition is a proportion of the two or more limiting compositions called end members. Such minerals are commonly named for the end members they most nearly resemble in composition.

Read also:
What Gems Are Found in Igneous Rock?
10 Most Rare Gemstones in the World Rarer than a Diamond