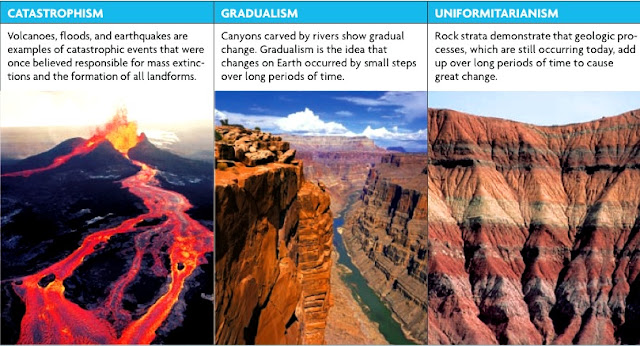 Geologists haven't always agreed about the history of our planet. They have debated between catastrophism and uniformitarianism over the last few hundred years!

I'd like you to meet an important scientist named Georges Cuvier. As a zoologist and naturalist, he helped establish our current understanding of the history of Earth. Cuvier formed the basic methods of biostratigraphy by studying sedimentary rock layers and fossil succession. He began the popular field of comparative anatomy by studying the bones of modern elephants and ancient mammoths. He named the first flying reptile, the pterodactyl, and he even has five living animals named after him.

Cuvier contributed a lot to our knowledge about the Earth. But the funny thing is, Cuvier also believed that Earth was only a few million years old! That's a big deal, considering we know now that the Earth is over four billion years old. How could a guy who knew so much about the Earth, who studied rocks and fossils and contributed so much to science, be so drastically wrong about the age of our planet?
As we'll see, it had a lot to do with Cuvier's upbringing and the scientific atmosphere that existed in his time. Let's look deeper into our geologic theories and see how they have changed over the last few hundred years.

George Cuvier lived in France right at the turn of the century, from 1769 to 1832. At that time in history, European scientists had a very strong habit of interweaving their studies of the Bible with their studies of natural science. When it came to Earth's history, they looked to the biblical story of the great flood to help them understand the geologic events of the past.
Outside the religious world, Cuvier was also making observations that puzzled him about the fossil record. He saw a lot of mysterious gaps; that is, certain species would show up for long periods of geologic time and then suddenly disappear. Combined with his impressions of the violent natural disasters recounted in the Bible, Cuvier's observations made him believe that most of Earth's history was characterized by geologic catastrophe. This idea emerged and spread among scientists as the theory of catastrophism.
Catastrophism is the theory that Earth's features are mostly accounted for by violent, large-scale events that occurred in a relatively short amount of time. So, a species that went extinct was probably killed off by a giant natural disaster. An impressive mountain range was probably formed by worldwide earthquakes and eruptions.
Cuvier and other scientists believed that most major features of the land we see today were established a very long time ago by very dramatic events. These events would not at all resemble the small-scale natural disasters we experience in our time. The drama was over, immortalized in religious texts, never again to be seen on such a humongous scale.

In 1785, a geologist and physicist named James Hutton proposed another idea. He thought that most of the features on the surface of the Earth were formed by slow, ongoing geologic processes, not by sudden catastrophic events. Hutton didn't believe that there was anything happening long ago that wasn't still happening on Earth today. In other words, 'the present is the key to the past.' The erosion of landforms, the deposition of sediments, the drifting of continents and the eruption of volcanoes - all of these were happening long ago, on roughly the same scale and at roughly the same rate as they are today.
Hutton's idea was a major turning point in the field of geology. He called it uniformitarianism: the theory that Earth's features are mostly accounted for by gradual, small-scale processes that occurred over long periods of time. Also called gradualism, the theory of uniformitarianism was fleshed out and popularized by another geologist, Charles Lyell.

In the 1830s, Lyell published Principles of Geology, which explained the finer details of uniformitarianism. The book became a keystone text for geologists and also influenced the evolutionary theories of Charles Darwin. But although Charles Lyell published the actual book, it is still James Hutton who gets the credit for being 'The Father of Modern Geology.' Hutton's principle of uniformitarianism gave geology a real boost that helped it grow into the highly-detailed, functional discipline that it is today.

Principles of Geology was published right around the time when Western science was trying to unravel itself from biblical and other religious associations. Scientists didn't feel like they had to account for the great flood anymore. Instead, they stuck to the things they could see: mountains eroding, volcanoes erupting, rivers shifting their courses.
Share to: