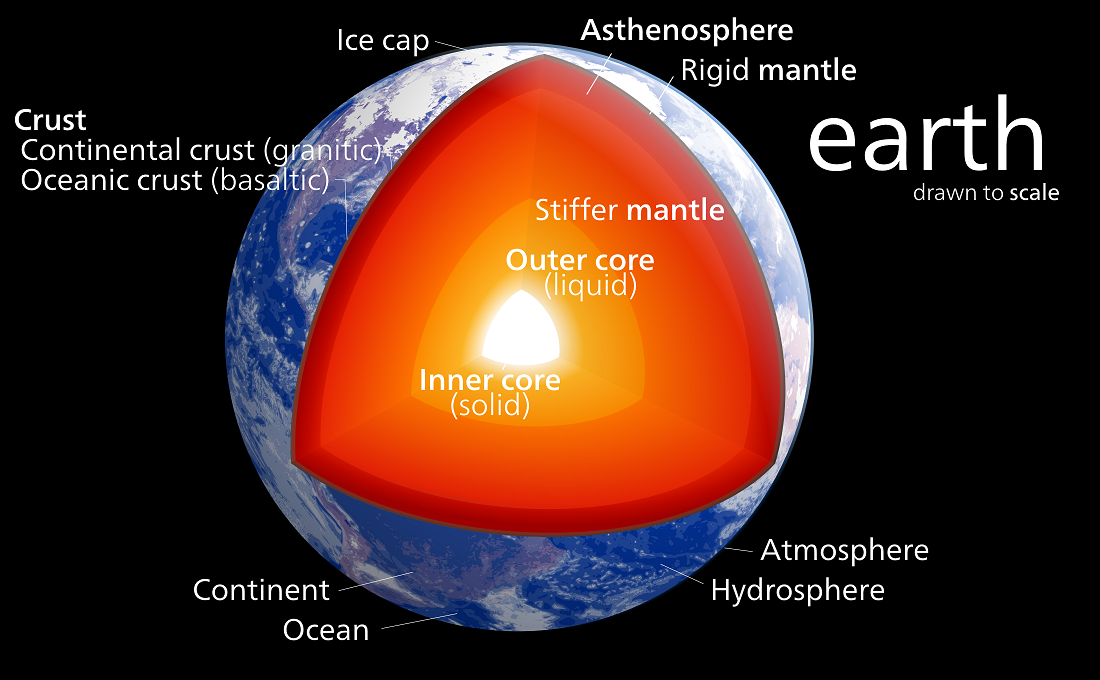 Earth Is Made of Many Layers

Have you ever thought about digging a hole to China? It seems like a logical way to get there instead of flying all the way around the globe. While this sounds like a great idea, it would take you much longer to dig through the Earth than to travel around it. Even if you could dig down that far, you would have a difficult time getting through all of the stuff that lies underneath the surface of the planet.
So if we can't dig that far, how do we know what makes up the interior of the earth? Scientists are able to understand Earth's interior by studying seismic waves. These are waves of energy that travel through Earth, and they move similarly to other types of waves, like sound waves, light waves, and water waves. Seismic waves are sent through the earth during earthquakes, and those energy waves are what cause the ground to shake as they travel through it.
Seismic waves are recorded by a machine called a seismograph, which tells us about the strength and speed of the seismic waves. These recordings made by a seismograph are called seismograms. Seismic waves travel at different speeds when they pass through different types of material, so by studying seismograms, scientists can learn a lot about Earth's internal structure.

Let's first review the two types of seismic waves, which we learned about in another lesson. Body waves are seismic waves that travel through Earth's interior, or its 'body.' Surface waves are seismic waves that travel through Earth's surface. Makes sense, right?
Surface waves are important, but they don't provide much information about what happens below the surface. For this, we need to study body waves so that we can see what Earth's 'body' is like.
There are two types of body waves, called P waves and S waves. P stands for primary waves because these waves travel the fastest and are detected first. S stands for secondary wave because these are slower than P waves, arriving second on the seismogram.

Since the information recorded on a seismogram tells us how fast body waves are moving when they travel through Earth, we can tell what type of material they're traveling through. As body waves travel through the Earth's internal layers, their speed changes, causing the wave to 'bend.'
This bending is similar to looking at a straw in a half-full glass of water. If you look at the straw from the side, it appears to 'bend' where it hits the surface of the water. This is because the light waves are bending and slowing down as they hit the different material, in this case the water. The same thing happens to body waves when they travel through the Earth.
We know that the surface of the Earth is solid because we can easily see this. But we need body waves to tell us what lies below. What they tell us is that directly below the crust is a layer of rock with a different density. As we learned in another lesson, this layer is called the mantle, and we know that it's a different density than the crust because seismic waves 'bend' and suddenly pick up speed where these two layers meet.
P waves can travel through both liquid and solid material, but S waves can only travel through solids. Since both P waves and S waves travel through the mantle, this means that it must be a layer of solid material. The really interesting part about this 'solid' layer is that even though it is rock, it 'flows' like a very thick liquid. It's similar to the consistency of silly putty, which if you punch hard, feels like a solid, but if you stretch slowly, moves like a liquid.
Another pretty significant change occurs at about 1,900 miles down. S waves suddenly stop as if they have hit a brick wall, and P waves 'bend' and slow down so much that no waves are detected at the surface of Earth. What this tells us is that there is another distinct change in density and composition here.
And in fact, this is the place where the mantle and the outer core meet. The mantle is made of mostly that 'liquid' rock that moves like silly putty, but the outer core is an area of mostly liquid iron, which is much denser than the rock in the mantle. Since S waves can't travel through liquid, this is why they run into a wall and stop. P waves can travel through it, but they do so much more slowly than through solid material.
Share to: