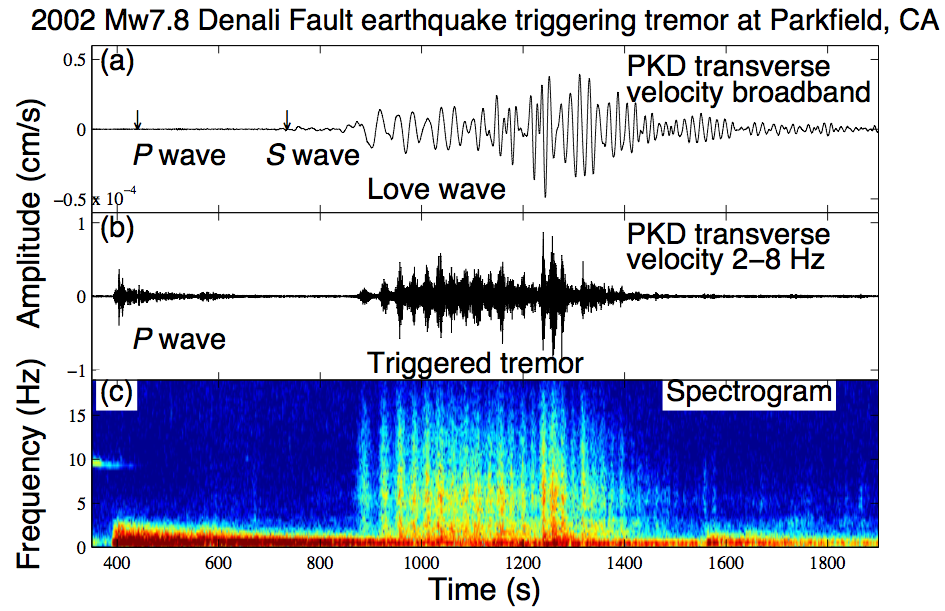 Scientists can learn a lot about earthquakes by studying how they move ground. Using seismic activity, we can learn where an earthquake originated as well as how strong it was.


What Is Seismic Activity?

There is a lot going on during an earthquake that you feel but don't see. Deep underground, the plates that make up the earth's crust are moving around. Sometimes they bump into each other at their boundaries. Because the edges of the plates aren't smooth, they can't just slide past one another. So when they bump into each other, the edges get stuck, but the rest of the plate continues to move. Eventually, the rock in the location where the plates are stuck breaks and releases a large amount of built-up energy.
As a result, the ground shakes violently and we have an earthquake. This is much like you pushing on an object that is lodged in place. You can push and push to get it moving, and if you eventually push enough, it will break free - but you might want to make sure you don't go toppling over when it releases!
Scientists can learn a lot about earthquakes by studying seismic activity, which is the frequency, size and type of earthquakes an area experiences over time. Since earthquakes happen deep underground, seismic activity can't be measured where the earthquake actually occurs. Instead, it's measured using an instrument called aseismograph, which records ground-shaking activity caused by earthquakes. The recording made by the seismograph is called a seismogram.

Just like dropping a stone into a pond sends water waves out in all directions from the center, an earthquake also sends waves out in all directions from its center through the land called seismic waves. An earthquake has different types of waves that it sends out.
The first type of waves that travel through the ground during an earthquake are called body waves, which are waves that travel through the earth's inner layers. There are two types of body waves: P and S waves. P stands for 'primary,' S for 'secondary.'
In order to understand how body waves move through the ground, we're going to compare them with the movement of a Slinky. If you take a Slinky and sort of shimmy it back and forth, a wave travels the length of the Slinky but the Slinky appears to stay in one place. This is called a compressional wave because the wave compresses the medium it's traveling through as it moves along. P waves travel in this fashion.
S waves move a bit differently. Take our Slinky again. This time, hold both ends, but now move one end up and down like a whip. A wave travels down the length of the Slinky, but more like a wave over the surface of water. This up and down wave movement is called a transverse wave.
Primary and secondary waves are named as such because of how fast they travel. P waves are the fastest seismic waves and secondary waves are the second fastest. Think of these like thunder and lightning. Light travels faster than sound, so you see the lighting before you hear the thunder - even though they come from the same source. Body waves are the same.
P waves arrive first at the seismograph (the primary wave to arrive), followed by S waves (the second wave to arrive). Just like scientists know how far away a lightning strike was by measuring the time until the thunderclap, scientists can determine how far away an earthquake is by measuring how much later S waves come than P waves.

The other type of waves produced by earthquakes are surface waves. These are waves that move across the surface of the earth and because of this are the waves that cause the most damage. The two surface waves are Love waves and Rayleigh waves. Love waves are the fastest surface wave (still not faster than P waves though!), so you can think of them as loving to travel across the ground. These move in a snake-like fashion, moving from side to side. It's like a transverse wave flipped on its side, moving the ground horizontally.
Rayleigh waves roll across the surface of the earth much like an S wave does underground or like a wave rolls across the surface of the ocean. The ground moves up and down with the wave movement, which, as you can imagine, does quite a bit of damage. In fact, most of the shaking that is felt during an earthquake comes from Rayleigh waves.

While these different types of waves can't help scientists predict when an earthquake will occur, they can provide a lot of information about an earthquake after the fact. Remember our seismogram? It's created with a pen that moves correspondingly with the ground shaking. And not only does it help to pinpoint the exact location an earthquake occurred underground, but it can also tell us about the size of an earthquake, or its magnitude. The larger the squiggly lines, the greater the magnitude of the earthquake.
Using the Richter Scale to Measure Earthquakes
By studying this seismic activity and comparing earthquakes over time, scientists can better understand where earthquakes occur most often and why. We know that most earthquakes occur along plate boundaries, but some boundaries seem to produce more earthquakes than others. If we can look back into history to see when and where earthquakes occur, as well as how strong they were, cities that are more prone to this type of natural disaster can better prepare for future ones.
Share to: