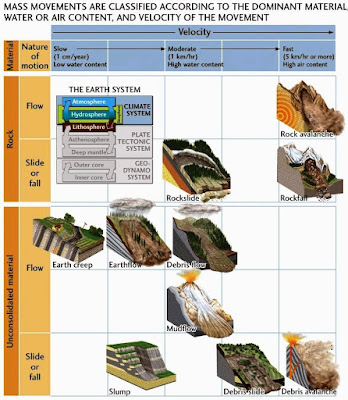 Mass wasting is a type of erosion that results in the mass movement of rock, soil and debris down a slope. Learn about the different types of mass wasting, including slumps, rockslides, debris flows and earthflows. 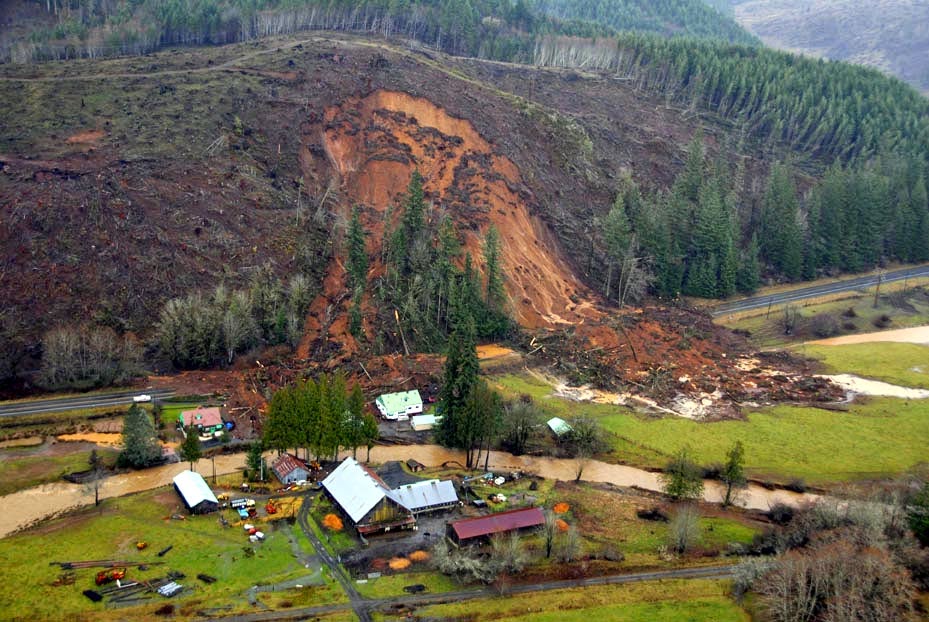 They say all good things must come to an end, and I guess this adage can apply to mountains. Eventually, even the best and mightiest mountain will wear away due to the natural eroding effects of the environment that eat away at rocks and soil holding the mountain together. When these resistive forces are overcome by gravity, we see mass wasting occur, which is the large movement of rock, soil and debris downward due to the force of gravity.
Mass wasting happens in different ways. On some mountains, we see portions of the mountain slope fail and slide down in defined units; while other mountains simply drop their rocks or have rocky debris mixed with water flow like a fluid down their slope.

So we see that mass wasting occurs when the gravitational pull acting on a mountain becomes too much for the mountain to resist. Therefore, anything that erodes or impedes the mountain's ability to resist this force may become one of the causes of mass wasting. For example, increased slope steepness will make a mountain or hill more prone to mass wasting simply because gravity has an easier time pulling materials down a steep slope as compared to a gentle slope.
Too much water or rainfall will also weaken a mountain or hillside's ability to resist gravity. This is an example of too much of a good thing. A little bit of water actually makes it easier for soil particles to bond together and keep the mountain intact. However, if there is too much rain or water, then the soil particles lose this bond and break apart.
If a mountain slope has decreased vegetation, then it will be more prone to mass wasting because it does not have the protective plant covering above ground or the soil anchoring roots system below ground. Also, disruptive events, such as earthquakes, can cause sections of mountain to detach due to the violent shaking that occurs. 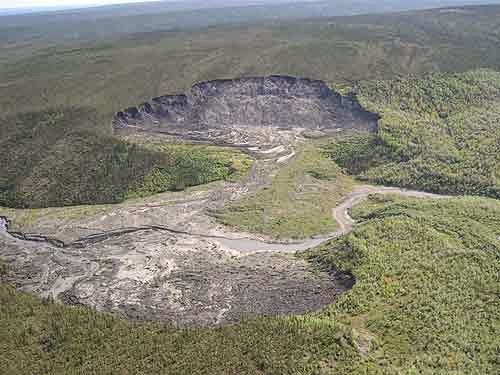 A slump is a type of mass wasting that results in the sliding of coherent rock materials along a curved surface. In a slump, a portion of the mountain moves down a short distance. It's almost like when you stand up straight and tall, and then slump your shoulders forward as if you're too tired to hold up your shoulders. In fact, if you were to look at an actual slump, it might appear to you as if the mountain just got tired of holding up that section of the mountain and let it drop down.

A slump is sometimes referred to as a rotational slide because a portion or block of the slope 'slides' down as it 'rotates' around an axis parallel to the slope. A slump can occur as a single unit or as a number of slumps grouped together, and they form when the base of the mountain slope or hillside is eroded or cut away. For instance, water or waves may undercut a mountain slope, removing the physical foundation holding up the rocky material. Without a base, the block of mountain goes 'kerplunk' and slumps down.
Slumps can also be blamed on human activities. For example, if a road crew cuts away the base of a mountain slope to make room for a road, the structural stability of the slope could be weakened, resulting in a slump. 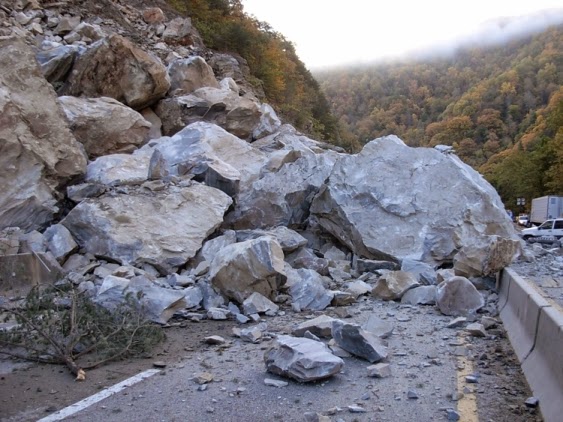 Another type of mass wasting is a rockslide, which is the sliding of rock material down a mountain. It is similar to a slump, in that there is a mass failure of the slope, but a rockslide does not rotate as a block around an axis, like a slump. Therefore, a rockslide is more of a translational slide because it moves in a more uniform direction along a pre-existing plane, such as an underlying layer of rock.
It is as if the rocks were skiing down the slope and nothing is going to stop them until they reach the bottom. And they often do reach the bottom of the slope. So, in an area that experienced a rockslide, it's common to see a pile of rocks at the base of the slope.

With slumps and rockslides, we see the slope fails as a mass of rock and sediment falling together as somewhat large coherent blocks of material. However, there are other types of mass wasting that happen when loose materials mix with water and air and flow down the slope like a fluid. This type of mass wasting is referred to as a flow. A debris flow is the movement of a water-laden mass of loose mud, sand, soil, rock and debris down a slope.
A debris flow can dash down the slope, reaching speeds of 100 miles per hour or greater. That's as fast as a Major League Baseball pitcher's best fastball, so as you can imagine, debris flows can be very destructive and dangerous. As the flow moves down slope, it picks up debris in its path, including trees, bridges and buildings. Every year, people are caught off guard and killed by debris flows.
Share to: