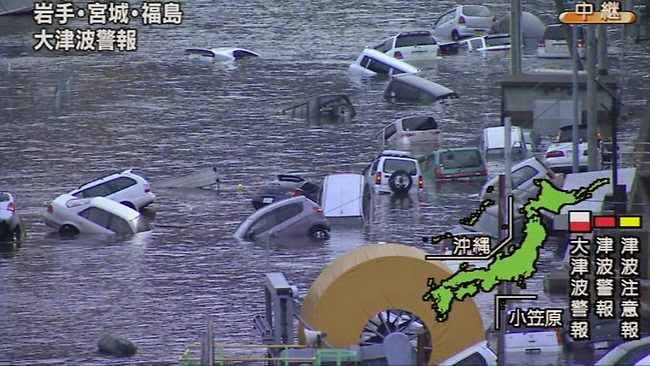 Buildings destroyed by the 2011 Tohoku earthquake released thousands of tons of climate-warming and ozone-depleting chemicals into the atmosphere, according to a new study.

New research suggests that the thousands of buildings destroyed and damaged during the 9.0 magnitude earthquake and tsunami that struck Japan four years ago released 6,600 metric tons (7,275 U.S. tons) of gases stored in insulation, appliances and other equipment into the atmosphere.
Emissions of these chemicals, called halocarbons, increased by 21 percent to 91 percent over typical levels, according to the new study accepted for publication in Geophysical Research Letters, a journal of the American Geophysical Union.
First look
The study is the first to look at how the Tohoku earthquake affected the release of halocarbons into the atmosphere and likely one of the first to examine emissions of these gases following a natural disaster, according to the study's authors.
"What we found is a new mechanism of halocarbon emissions coming from the earthquake," said Takuya Saito, a senior researcher at the National Institute for Environmental Studies in Tsukuba, Japan, and lead author of the new paper.
Halocarbons released as a result of the earthquake include chemicals that deplete the ozone layer and contribute to global warming -- including some gases that are no longer used because of those harmful effects on the environment. These include chlorofluorocarbons like CFC-11, a powerful ozone-depleting chemical used in foam insulation until it was phased out in 1996, and hydrochlorofluorocarbons like HCFC-22, an ozone-depleting refrigerant that is also a powerful greenhouse gas and is in the process of being phased out of use. Among other halocarbons released by the earthquake were hydrofluorocarbons, or HFCs, and sulfur hexafluoride, both potent greenhouse gases.
The emissions of the six halocarbons released from Japan in 2011 are equivalent to the discharge of 1,300 metric tons (1,433 U.S. tons) of CFC-11 alone -- equal to the amount of CFC-11s found in 2.9 million refrigerators manufactured before the chemical was banned. The total emissions of the six chemicals are also equivalent to the release of 19.2 million metric tons (21.2 million U.S. tons) of carbon dioxide into the atmosphere -- an amount equal to about 10 percent of Japanese vehicle emissions in 2011, according to the study's authors.
Post-quake surprise
Saito and his colleagues decided to investigate halocarbon emissions and their relationship to the earthquake after ground-based air monitoring stations in Japan recorded surprising high levels of these chemicals. The stations are on Hateruma Island, east of Taiwan; Cape Ochiishi, on the east side of Hokkaido; and Ryori, north of Tokyo on Honshu.
The study's authors combined these measurements with an atmospheric model and other mathematical methods to figure out that increased emissions from the earthquake were involved, how much of the emissions could be attributed to the disaster and how they compared to previous years.
They found that emissions of all six halocarbons were higher from March 2011 to February 2012, following the earthquake, than they were during the same time the year before the event and during the same period the year after it.
About 50 percent of the halocarbon emissions after the earthquake were of HCFC-22, likely due to damage to refrigerators and air conditioners. Emissions of the gas were 38 percent higher than the years before and after the earthquake. Emissions of CFC-11 were 72 percent higher than emissions before and after the earthquake, likely due to damage to insulation foams used in appliances and buildings, according to the study. Emissions of two types of HFCs -- HFC-134a and HFC-32 -- rose by 49 percent and 63 percent compared to the years before and after the disaster.
Impacts assessed
The new study also calculates the total impact of the increased emissions on ozone depletion and global warming. The earthquake-triggered surge of halocarbons increased ozone loss from Japanese emissions of those six gases by 38 percent from March 2011 to February 2012 compared to the same time period in the years before and after the event. The amount of heat trapped in the atmosphere because of Japan's emissions of those six gases rose 36 percent from March 2011 to February 2012 compared to earlier and later years because of the extra emissions from the earthquake, according to the new study.
Saito said the new study shows the importance of including the release of gases from natural disasters in emissions estimates. Although the global effect of one event is small -- emissions associated with the Tohoku earthquake accounted for 4 percent or less of global emissions in 2011 -- the cumulative effect could be larger, he said. Natural disasters accelerate the release of halocarbons and replacement of these gases could lead to the use of more halocarbons, according to the study.
National halocarbon emissions estimates by the Japanese government did not factor in the release of the chemicals due to the earthquake and are likely underestimating the amount of these substances in the atmosphere, according to Saito. Governments rely on inventories of chemicals and generic data about how they are used to estimate their amounts in the atmosphere -- called a "bottom-up" approach" -- whereas the new study uses actual measurements of the gases -- called a "top-down" approach. "It is apparent that there are unreported emissions," Saito said.
The new study shows that there could be a need to include the amount of halocarbons released by catastrophic events in emissions estimates, said Steve Montzka, a research chemist at the National Oceanic and Atmospheric Administration in Boulder, Colorado, who was not involved in the research. It also highlights the need for more measurements of halocarbons in the atmosphere, he added, rather than relying on bottom-up emissions estimates from inventories.
"Atmospheric scientists often say that relying solely on bottom-up inventories to tell you how greenhouse gas emissions change is like going on a diet without weighing yourself," Montzka said.

The above story is based on materials provided by American Geophysical Union.Note: Materials may be edited for content and length.
Share to: