What Is Druzy, and How Does It Form? 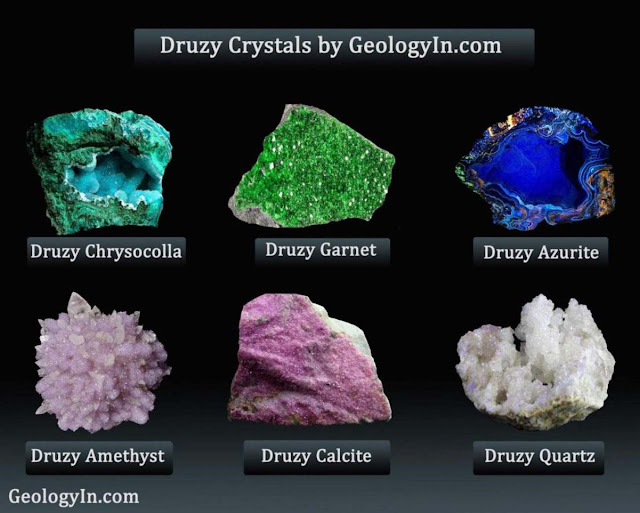 The word druse (Also Known as Drusy or Druzy), refers to an aggregate mass of small crystals (“crystal druse”). These crystal intergrowths or clusters can be formed by many different minerals. The mineral species and shapes of crystals formed are dependent on fluid composition. Crystal size is a function of fluid temperature and pressure.

Quartz is one of the most common druzy types because of the prevalence of silica throughout the world. No matter what mineral forms the druzy, the overall appearance usually resembles that of sugar. The tiny crystals are considered beautiful because, like large gemstones, they glitter and catch rays of light.

Minerals like: Garnet, Dolomite, Malachite, and Calcite are also found in Druzy Crystals.

The geological process that forms a druzy, the layer of crystals on the rock, occurs when water brings minerals onto a rock's surface. When the water evaporates, cooling occurs and the minerals are left behind to form crystals on top of the rock. Depending on the minerals, druzy gemstones can be almost any color of the rainbow, including white, pink, blue, purple, green or black.

Most druse forms as cavity lining in geodes. The botryoidal agate mass of the geodes are irregular, lumpy like a cluster of grapes. As a result, typically the surface area for cutting a cab is small. Large stones are less common. Many cutters keep a border of plain agate around the druse covered area of the cab to produce larger cabs.

In most druse, the terminations of crystals appear random and stones glitter like a fistful of tiny diamonds as the viewing angle changes with movement. Some rare formations of druse occur in which the alignment of the crystal faces are uniform across the surface and the glitter turns to a flash.


Colors of natural druse vary widely and enhanced variations are infinite. Crystal druses of most mineral species other than quartz are rare, so >95% of the Drusy on the market is quartz.

These coatings and dyes are popular for improving the less attractive colors of naturally brilliant druse crystal aggregates turning shades of gray and brown into “cobalt blue” and “titanium purple”.


See also:
The Different Beryl Varieties with Photos
Types of Iridescent Gemstones & Minerals
How the Color or Clarity of Gemstones Is Altered?
Share to: