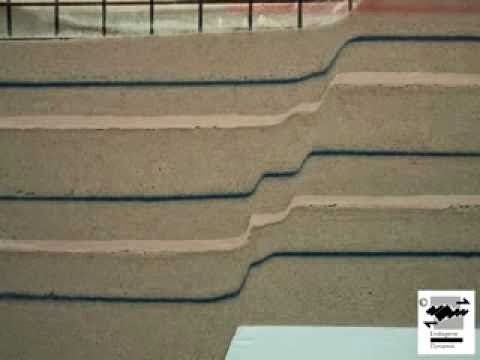 New modeling and analyses of fault geometry in the Earth's crust by geoscientist Michele Cooke and colleagues at the University of Massachusetts Amherst are advancing knowledge about fault development in regions where one geologic plate slides past or over another, such as along California's San Andreas Fault and the Denali Fault in central Alaska.

Findings may help more accurately predict earthquake hazards and allow scientists to better understand how Earth evolved.
Geologists have long been uncertain about the factors that govern how new faults grow, says Cooke, who was recently elected to the board of directors for the Southern California Earthquake Center. This month in an early online issue of the Journal of Geophysical Research, she and colleagues explain fault evolution near fault bends in greater detail than ever before with experiments using kaolin, or china clay, prepared so its strength scales to that of the Earth's crust when confined in a clay box.
Fault efficiency refers to a dynamic fault system's effectiveness at transforming input energy from the motions of tectonic plates into movement. For example, a straight fault is more efficient at accommodating strain than a curving fault. An important question is how the efficiency of fault bends evolves with increasing deformation of Earth's crust.
Master's student Alex Hatem, who did much of the work in these experiments, with Cooke and postdoctoral scholar Elizabeth Madden, report that fault efficiency increases as new faults grow and link, then reaches a steady state. This implies that bends along crustal faults may persist. The straight fault is the most efficient geometry, Cooke points out. "It's interesting that bends increase in efficiency through new fault growth but they never become as efficient as straight faults."
Because earthquakes may stop at restraining bends, it further suggests a new understanding: faults segmented by restraining bends may remain in a sort of stasis rather than developing into systems where earthquakes would rupture the entire length of the fault. Here Cooke explains that comparing a straight fault with a fault at a bend, it is more likely that the fault with the bend will have smaller earthquakes that stop at the bend rather than long earthquake ruptures that pass all the way along the fault.
Her UMass Amherst lab is one of only a handful worldwide to use a state-of-the-art modeling technique based on kaolin clay rather than sand to understand the behavior of the Earth's crust. Their advanced techniques with the clay include pixel tracking and other quantitative measurements that allow rich details to be obtained from the models and compared with faults around the world.
When scaled properly, data from clay experiments conducted over several hours in a table-top device are useful in modeling restraining bend evolution over thousands of years and at the scale of tens of kilometers. Digital image correlation allows Cooke's team to measure the details of deformation throughout the experiments.
For this work, they conducted kaolin experiments to model strike-slip rates measured in a restraining bend along a Dead Sea fault in Israel, a fault growth along the Denali Fault in Alaska, and through the San Gorgonio Knot along the San Andreas Fault in southern California.
"We apply the results to the southern San Andreas Fault where a restraining bend has persisted for 25 million years, but during that time its active fault configuration has changed in ways that resemble what we observed in our experiments," the authors note.
They add, "Results of the clay box experiments provide critical insights into the evolution of restraining bends. Because the experiments scale to crustal lengths and strengths, we can extrapolate from the experiments to kilometer-scale systems. The models show progressive deformation by the successive outboard growth of dipping faults in some cases and persistence of vertical fault in others."
Understanding the conditions that foster these distinct patterns helps us interpret the geometry and loading of faults within Earth's crust in order to better constrain earthquake behavior.
Cooke says, "Using new digital image correlation techniques allows us very detailed measurements of the displacement in the experiments to provide insights we didn't have before. For the fault bends that we tested, the new analysis reveals that efficiency of the faults increases as new faults grow and link and then reaches a steady state. This suggests that restraining bends along crustal faults may persist," Cooke says.

The above story is based on materials provided by University of Massachusetts at Amherst. Note: Materials may be edited for content and length.
Share to: