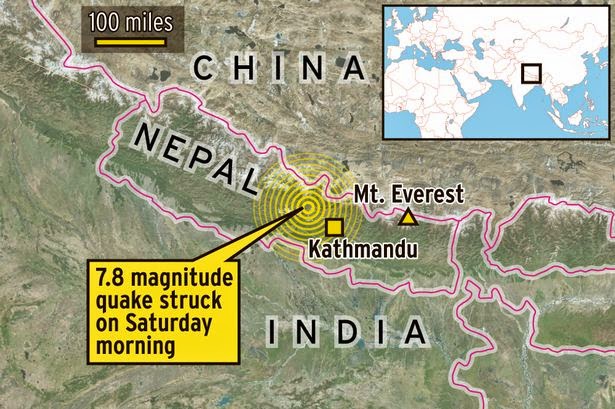 The tremor which struck Nepal on Saturday, killing more than 3,500 people, may have caused a land area around the capital Kathmandu to budge by several metres, experts say.

Q: Did Kathmandu move?
Possibly about three metres (10 feet) southward, according to initial analysis of seismological data obtained from sound waves which travel through Earth after an earthquake, said University of Cambridge tectonics expert James Jackson.

An area of about 150 kilometres (93 miles) long and 50 km wide in a fault running underneath the Kathmandu valley, gave in after decades of pressure, causing rocks on top of the fault to slip southward over the rock underneath it.

The fault lies between two tectonic plates—one bearing India pushing northward into a plate carrying Europe and Asia at a rate of about two centimetres (0.8 inches) per year—the process that created the Himalayas in the first place.

Saturday's lurch likely saw the Kathmandu region rise (in elevation) by about half a metre, while the area to its north sank by about the same margin.

Mount Everest was likely be too far east to have been affected.

The shifts may be large enough to necessitate adjustments to high-precision world maps.

Q: How does the quake compare to others?
Japan's 2011 Tohoku earthquake saw undersea plate movements of about 50 metres, said Paul Tapponnier from Singapore's Earth Observatory, and large land shifts along the shoreline as well.

The largest earthquake in the Himalayas hit Assam in 1950, displacing portions of land by almost 30 metres.

The latest quake had a magnitude of 7.8, much less violent than the 8.2-8.5 typical for the area, said Tapponnier, and likely not strong enough to have relieved all the stress accumulated along the fault.

Q: When will the next one be?
One thing the experts agree on, is that there will be more major quakes in the stricken region. What nobody knows, is when.

According to Gary Gibson of the University of Melbourne's School of Earth Sciences, earthquakes with a magnitude greater than 7.5 have shaken Kathmandu every 100 years on average over the last 1,000 years. But the intervals between them varied from 23 years to 273 years.

Just a part of the fault gives in every time, making the adjoining area unstable in turn, and setting up conditions for the next quake, said the experts.