How hot material is stopped in Earth's mantle? 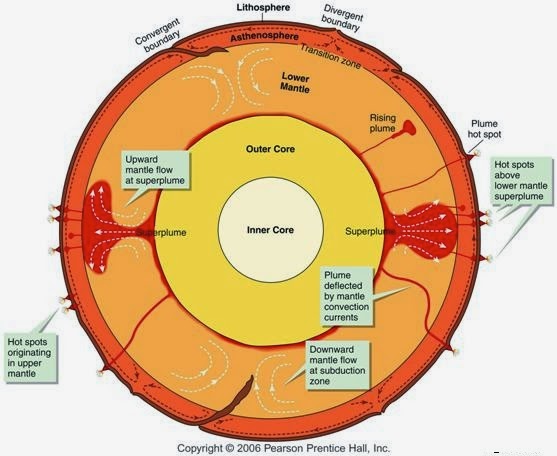 Gigantic volumes of hot material rising from the deep earth's mantle to the base of the lithosphere have shaped the face of our planet. Provided they have a sufficient volume, they can lead to break-up of continents or cause mass extinction events in certain periods of the Earth's history. So far it was assumed that because of their high temperatures those bodies -- called mantle plumes -- ascend directly from the bottom of the earth's mantle to the lithosphere. Scientists explain possible barriers for the ascent of these mantle plumes and under which conditions the hot material can still reach the surface. In addition, the researchers resolve major conflicts surrounding present model predictions.

The largest magmatic events on Earth are caused by massive melting of ascending large volumes of hot material from Earth's interior. The surface manifestations of these events in Earth's history are still visible in form of the basaltic rocks of Large Igneous Provinces. The prevailing concept of mantle plumes so far was that because of their high temperatures, they have strongly positive buoyancy that causes them to ascend and uplift the overlying Earth's surface by more than one kilometer. In addition, it was assumed that these mantle plumes are mushroom-shaped with a large bulbous head and a much thinner tail with a radius of only 100 km, acting as an ascent channel for new material. But here is the problem: In many cases, this concept does not agree with geological and geophysical observations, which report much wider zones of ascending material and much smaller surface uplift.

The solution is to incorporate observations from plate tectonics: In many places on Earth's surface, such as in the subduction zones around the Pacific, ocean floor sinks down into Earth's mantle. Apparently, this material descends up to a great depth in Earth's mantle over several millions of years. This former ocean floor has a different chemical composition than the surrounding Earth's mantle, leading to a higher density. If this material is entrained by mantle plumes, which is indicated by geochemical analyses of the rocks of Large Igneous Provinces, the buoyancy of the plume will decrease. However, this opens up the question if this hot material is still buoyant enough to rise all the way from the bottom of Earth's mantle to the surface.

GFZ-researcher Juliane Dannberg: "Our computer simulations show that on the one hand, the temperature difference between the plume and the surrounding mantle has to be high enough to trigger the ascent of the plume. On the other hand, a minimum volume is required to cross a region in the upper mantle where the prevailing pressures and temperatures lead to minerals with a much higher density than the surrounding rocks."

Under these conditions, mantles plumes with very low buoyancy can develop, preventing them from causing massive volcanism and environmental catastrophes, but instead making them pond inside of Earth's mantle. However, mantle plumes that are able to ascend through the whole mantle are much wider, remain in Earth's mantle for hundreds of millions of years and only uplift the surface by a few hundred meters, which agrees with observations.

The above story is based on materials provided by Helmholtz Centre Potsdam - GFZ German Research Centre for Geosciences.
Share to: