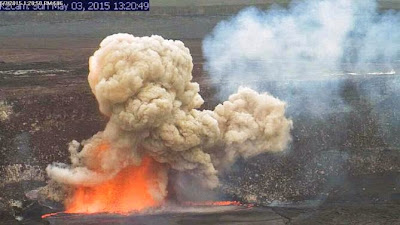 A series of earthquakes and shifting ground on the slopes of Kilauea have scientists wondering what will happen next at one of the world's most active volcanos.

A lake of lava near the summit of Kilauea on Hawaii's Big Island had risen to a record-high level after a recent explosion. But in the past few days, the pool of molten rock began sinking, and the surface of the lava lake fell nearly 500 feet.
Meanwhile, a rash of earthquakes rattled the volcano with as many as 20 to 25 quakes per hour, and scientists' tilt meters detected that the ground was deforming.
"Clearly the lava, by dropping out of sight, it has to be going somewhere," said Steven Brantley, deputy scientist in charge of Hawaiian Volcano Observatory of the U.S. Geological Survey.
One possibility is that a new lava eruption could break through the surface of the mountain, Brantley said.
Right now, there are two active eruptions on Kilauea. One is the eruption spewing into the lava lake in the Halemaumau Crater, which is visible in Hawaii Volcanoes National Park. The other is Puu Oo vent, in Kilauea's east rift zone, which sent fingers of lava toward the town of Pahoa before stopping outside a shopping center last year.
The flurry of earthquakes that peaked in intensity Friday have been rattling Kilauea's southwest rift zone, so it's possible that a new eruption could occur southwest of the Halemaumau Crater, or even in the crater itself, Brentley said. Or, the tilting, shifting ground could lead to nothing.

"We don't know what the outcome of this activity might be," Brantley said. "That is the challenge, is trying to interpret what this activity really means in terms of the next step for Kilauea."
An eruption on the southwest side wouldn't pose a threat to the population, because the area is generally closed to the public and there aren't any structures.
The earthquake activity had slowed Saturday morning, and scientists were continuing to watch the volcano closely, Brantley said.
Share to: