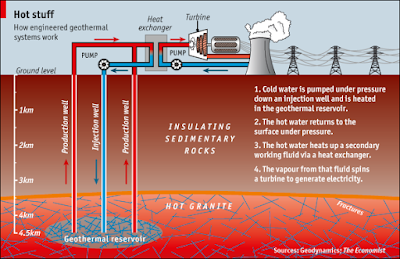 Rocks store information about the temperatures that they have experienced. Wageningen University researchers and international colleagues are the first to develop a method that reveals low-temperature information (from 35 °C and higher) on a relatively short timescale of thousands of years. The new method might find application in locating geothermal reservoirs and in maintaining underground tunnels.


The deeper you go into the Earth, the warmer it gets. But how warm exactly can differ from location to location, for example because of snowmelt infiltration or a warm aquifer amidst the rocks. Luminescence can retrieve the temperatures that the rocks have experienced over thousands of years. The technique is based on trapped electrons that build up in crystals under the competing influences of natural radioactivity and heat. It is a fine balance, and small changes in temperature cause large changes in the signal intensity. The signal can be extracted in the laboratory by light.

Together with international colleagues, Benny Guralnik, formerly at ETH-Zürich and now working for the Netherlands Centre for Luminescence dating (NCL) at Wageningen University, and Christina Ankjærgaard of the NCL developed the first method that can translate a signal in rocks that have experienced low temperatures (between 35 and 80 degrees Celsius) in the upper two kilometres of the Earth. Because of the new translation method, luminescence measurements on rock samples can give unique recent information about past temperatures, dating back 10,000 to 100,000 years.

Existing methods provide information on timescales of millions of years, for deeper Earth layers and higher temperatures. Temperature measurements obtained from direct drilling do not provide this information either. Guralnik: "When we measure temperature in a drill hole with instruments, we get an indication of the temperature at that particular moment, but the drilling itself and the circulating waters often disturb the outcome. When we interpret luminescence signals, we begin to understand truly natural temperatures as averaged over thousands of years."

Astrophysics
In developing the new method, Guralnik reverted to theoretical work of the Austrian-German astrophysicist Fritz Houtermans of the fifties in the past century. Together with colleagues, he then collected a suite of rock samples in an existing drill hole in Southwestern Germany. Here, underground temperatures are well-known from both direct measurements and other methods. With these rock samples he validated the theory in the lab. "It was like making a crossword puzzle. We could check the outcomes in the back of the book to see if our solution was correct."


Geothermal energy
The new method can be applied both above ground and underground, says Guralnik. "Similar to oil prospecting, you can look for underground heat with this method. We still enormously under-exploit geothermal energy, although it is a renewable source of energy." Another application is the determination of the safety of underground nuclear waste storage. "Nuclear waste both affects and is affected by the temperature of surrounding rocks. The method we developed could help assess that the rocks have not experienced severe temperature changes in the past."

Another application of the new luminescence method can be for building and maintenance of underground tunnels, as it can potentially help finding weak spots. It can also help climate research and archaeologists, explains Guralnik. "At daytime, desert surfaces can reach temperatures of 70 °C. If you can retrieve the surface temperature as averaged over thousands of years, this could tell you more about the evolving regional climate. Archaeologists might discover more about cooking stones; whether a stone believed to have been used for cooking, was indeed a cooking stone."

Using seventy year old literature was no abnormality to Guralnik. "According to my father, something new is often something old that has been forgotten. Moreover, it shows the history of science. It easily can take fifty years before an idea yields results. Just as Newton said: 'If I have seen further, it is by standing on the shoulders of giants.'"