How Do Gold Nuggets Form? 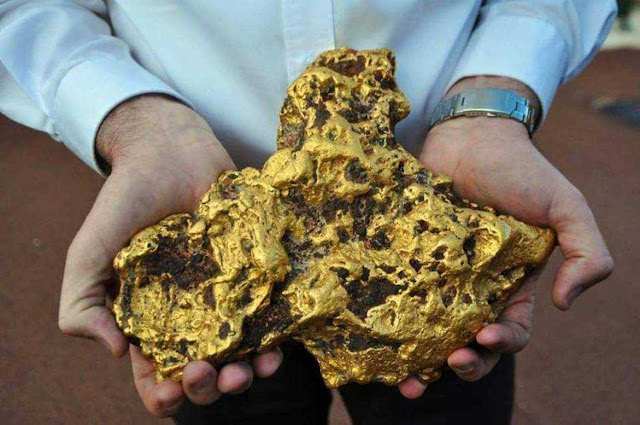 A gold nugget is a naturally occurring piece of native gold. Watercourses often concentrate nuggets and finer gold in placers. Nuggets are recovered by placer mining, but they are also found in residual deposits where the gold-bearing veins or lodes are weathered.

Nuggets are also found in the tailings piles of previous mining operations, especially those left by gold mining dredges.

The origin of gold nuggets is a matter of debate. Many gold nuggets formed as clusters of gold crystals from very hot water in cracks and fissures in hard-rocks, often with quartz. Later, weathering released the gold nuggets that end up in a stream due to gravity.

But many gold nuggets are found in areas where there seems to be no hardrock gold other than sometimes lots of microscopic gold.


Five rival theories then apply, and they might all be right:

1- Gold nuggets form because gold is malleable, bendable and sticky. During transport small gold particles may stick together or indeed be cold-welded together by pressure and shearing in movement of gravels down a slope or in a stream bed. Shearing and hammering creates a small nugget and then they snowball together by squeezing, hammering and shearing in moving gravels. This sounds impossible but there is a lot of anecdotal evidence for it, such as one of the nuggets shown below. Gold is soft, and behaves like extremely heavy chewing gum that gathers together and sticks together. It is interesting that often gold particles get bigger as nuggets for a few km downstream of the gold source, whereas platinum just seems to get smaller and smaller and platinum nuggets are correspondingly rare - platinum isn't sticky!

2- Gold nuggets form because groundwater becomes rich in dissolved gold which sooner or later precipitates in soils and gravels as nuggets. The theory is that the gold precipitates on gold, and so the mass of crystals grows and grows. Now it seems that as well as routine precipitation of gold, the main cause is the role of special bacteria in causing precipitation.

3- Gold nuggets form from hard-rock gold that is now completely worn away, and so the gold prospector cannot find any evidence of hard-rock gold. It was there, but the evidence has now GONE!

4- Gold nuggets in modern placers come from old placers being eroded. The older placers, known as paleoplacers might be just a few thousand years old such as river terraces, or be millions of years old.

5- Gold nuggets weathered out not from 'them thar hills' but from hardrock gold in a zone of weak shattered rock that the stream eroded. Often hardrock gold is missed, being hidden under the placer!

Nuggets are usually 20.5K to 22K purity (83% to 92%). Gold nuggets in Australia often are 23K or slightly higher, while Alaskan nuggets are usually at the lower end of the spectrum. Purity can be roughly assessed by the nugget color, the richer and deeper the orange-yellow the higher the gold content. Nuggets are also referred to by their fineness, for example "865 fine" means the nugget is 865 parts per thousand in gold.

Where Are Gold Nuggets Found?

It found in residual deposits where the gold-bearing veins or lodes are weathered. Nuggets are also found in the tailings piles of previous mining operations, especially those left by gold mining dredges.

Coarse gold did not occur in all gold fields, even when some were considered especially rich. In some areas of Australia the gold is fine and concentrated in crevices in bedrock and any gravel wash overlying this. A metal detector cannot pick up this fine gold sprinkled through sand and gravel, nor can it detect minute traces of gold still enclosed in quartz reef material.