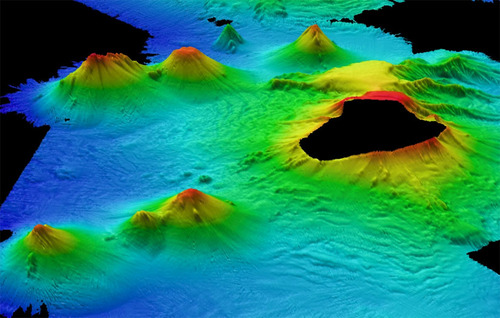 Scientists are setting sail from Southampton for the middle of the Atlantic Ocean, to drill rocks that were once part of the Earth’s mantle. They will explore the Atlantis Massif, a 4,000 meter high underwater mountain on the Mid-Atlantic Ridge, which is part of the world’s longest mountain chain.

Dr Gaye Bayrakci, a postdoctoral researcher from Ocean and Earth Science, is part of IODP Expedition 357 on board the Royal Research Ship James Cook that will explore the Atlantis Massif, a 4,000 metre high underwater mountain on the Mid-Atlantic Ridge, which is part of the world's longest mountain chain. This the first time a UK research ship will be used for scientific ocean drilling.

Dr Bayrakci and the team will collect cores of rocks and take fluid and microbial samples using two specialist robot drills. During the six-week expedition, the team plan to drill at 11 sites in water depths of 720 to 1,770 metres and recover cores between 50 and 70 metres in length. Dr Bayrakci said: "Scientifically the Atlantis Massif is remarkable because it is made up of rocks that were recently part of the Earth's mantle. In the presence of seawater these rocks produce the greenhouse gas methane, hydrogen and heat, among other things. Such rock reactions are exciting because they provide possible energy sources to fuel life in the absence of sunlight. The reactions occurring at the Atlantis Massif today may be similar to conditions found on other planets, or early in Earth's history."

The expedition is part of the International Ocean Discovery Program (IODP) and will be conducted by the European Consortium for Ocean Research Drilling (ECORD). The two rock drills installed on the RRS James Cook are designed and operated by the British Geological Survey and MARUM, the Center for Marine Environmental Sciences in Bremen, Germany. It is the first scientific ocean drilling expedition to use this type of remotely operated seabed rock drilling technology. When successful, this will open a whole new avenue to investigating the ocean floor that complements traditional approaches using very large drill ships such as the JOIDES Resolution.

Professor Damon Teagle, from Ocean and Earth Science at the University of Southampton and a veteran of numerous scientific ocean drilling expeditions, said: "It is very exciting for IODP to be using a British ship and new technologies to investigate the strange reactions that occur when seawater meets rocks of the upper mantle. It is a long time since a scientific ocean drilling expedition sailed from a UK port. It is great that this cruise departed from the National Oceanography Centre Southampton, which hosts a large scientific community that uses ocean drilling as a key tool to unravel how our planet operates and past climate and tectonic cycles."

The UK's involvement in the IODP expeditions is funded by the Natural Environment Research Council.

The above post is reprinted from materials provided by University of Southampton. Note: Materials may be edited for content and length.