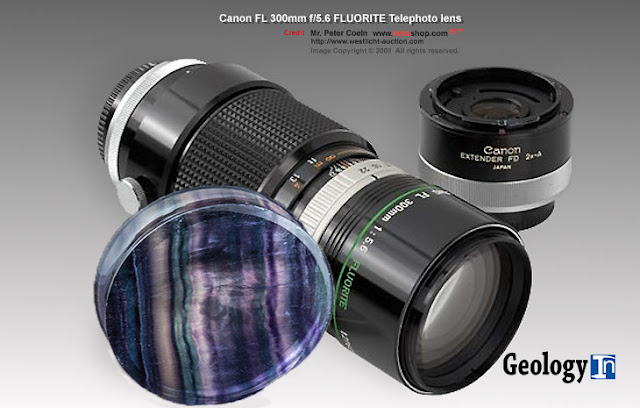 Fluorite has so many uses as a mineral, from toothpaste to flux to Teflon, but did you know that it produces one of the most clear camera lenses on the market today?

It’s used because its structure allows a window for both infrared and ultraviolet wavelengths to pass through thus creating a clearer sharper image.  Now, no more green fuzz found in your images -Fluorite makes it disappear.


Fluorite is a colorful mineral, both in visible and ultraviolet light, and the stone has ornamental and lapidary uses. Industrially, fluorite is used as a flux for smelting, and in the production of certain glasses and enamels. The purest grades of fluorite are a source of fluoride for hydrofluoric acid manufacture, which is the intermediate source of most fluorine-containing fine chemicals. Optically clear transparent fluorite lenses have low dispersion, so lenses made from it exhibit less chromatic aberration, making them valuable in microscopes and telescopes. Fluorite optics are also usable in the far-ultraviolet range, where conventional glasses are too absorbent for use.

With the advent of synthetically grown fluorite (calcium fluoride crystal), it could be used instead of glass in some high-performance telescopes and camera lens elements. Its use for prisms and lenses was studied and promoted by Victor Schumann near the end of the 19th century.


Read also:
What is Adularescence?