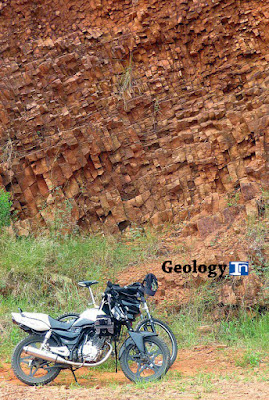 There are only a few places in the world where you can find sandstone formations like these. For example: Canada, South Africa and Paraguay, but they also can be found in Egypt and Israel.

The Patiño Formation sandstones, which crop out in Areguá neighborhood in Eastern Paraguay and show columnar joints near the contact zone with a nephelinite dyke, have as their main characteristics the high proportion of syntaxial quartz overgrowth and a porosity originated from different processes, initially by dissolution and later by partial filling and fracturing. 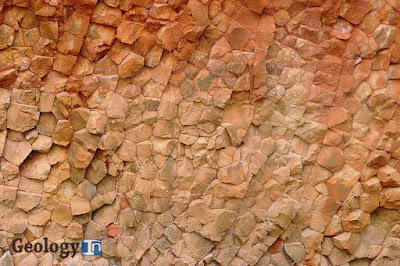 Features like the presence of floating grains in the syntaxial cement, the transitional interpenetrative contact between the silica-rich cement and grains as well as the intense fracture porosity are strong indications that the cement has been formed by dissolution and reprecipitation of quartz from the framework under the effect of thermal expansion followed by rapid contraction.
The increase of the silica-rich cement towards the dyke in association with the orthogonal disposition of the columns relative to dyke walls are indicative that the igneous body may represent the main heat source for the interstitial aqueous solutions previously existing in the sediments. At macroscopic scale, the increasing of internal tensions in the sandstones is responsible for the nucleation of polygons, leading to the individualization of prisms, which are interconnected by a system of joints, formed firstly on isotherm surfaces of low temperature and later on successive adjacent planes towards the dyke heat source.

The columnar joints of the Cِi and Choror hills occur in reddish eolian sandstones, with the columns disposed orthogonally at both sides and terminations of the 0.8 m thick nephelinite dyke. Their inclination angle with the horizontal plane varies between 10ᶱ and 60ᶱ, but values of 40–50ᶱ are more frequent The columns diameter ranges from 3 to 10 cm and their length can reach up to 15 m.


The textural characteristics of the sandstones near the nephelinite dyke, including the abundant presence of fluid trapped as inclusions, suggest that initial silica-rich cement is composed of a low crystallinity phase, formed quickly in loco under conditions of intense dissolution and reprecipitation of quartz.

A hydrothermal event seems to be the most probable process to promote a rapid and localized dissolution of quartz in addition to the abrupt increasing of temperature and/or pH in the pore waters. The interstitial aqueous solutions in the sandstones were heated as consequence of magma injection causing partial dissolution of quartz grains, addition of silica to the interstitial liquid phase and further reprecipitation during cooling. 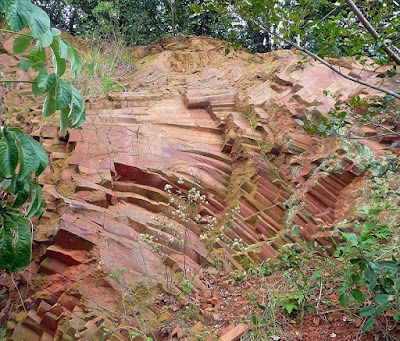 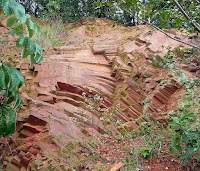 Rapid cooling and severe thermomechanical contraction lead to nucleation and propagation of the cracks. Increasing of internal tensions in the sandstone has caused the nucleation of polygons and consequent individualization of prisms interconnected by a system of joints. Joints acted firstly on isotherm surfaces of less temperature and later on successive adjacent planes towards the dyke heat source.
Cracking initiated on the surface of lower temperature isotherm and propagated towards the dyke following heat flow lines. The proposed mechanism for the origin of columnar joints in sandstones of Aregu, Eastern Paraguay, differs in terms of velocity from those admitted for the formation of similar features in igneous rocks, where the cells of heat convection can act for a long time interval over all the extension of the magmatic body. 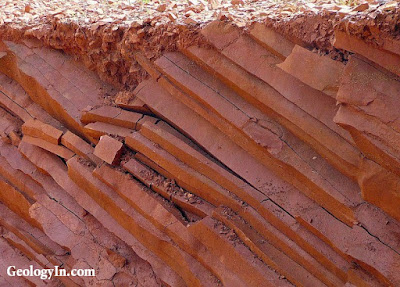 All the photos were taken by Ron Halliday
The above post is reprinted from Materials provided by University de São Paulo.
Share to: