The Temperature 3,000 Kilometers Below the Surface of the Earth 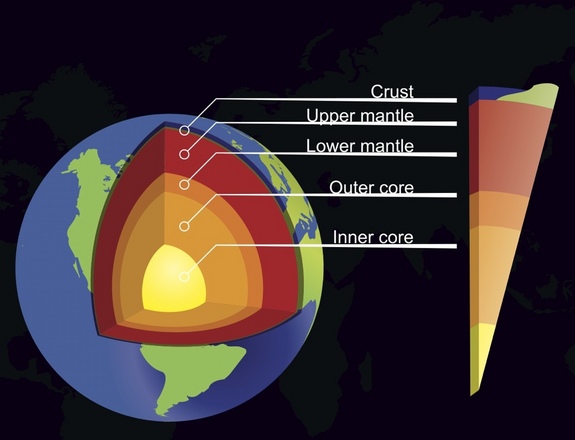 The temperature 3,000 kilometres below the surface of the Earth is much more varied than previously thought, scientists have found.

The discovery of the regional variations in the lower mantle where it meets the core, which are up to three times greater than expected, will help scientists explain the structure of the Earth and how it formed.

"Where the mantle meets the core is a more dramatic boundary than the surface of the Earth," said the lead researcher, Associate Professor Hrvoje Tkalčić, from The Australian National University (ANU).

Temperatures in the lower mantle the reach around 3,000-3,500 degrees Celsius and the barometer reads about 125 gigapascals, about one and a quarter million times atmospheric pressure.

Variations in these temperatures and other material properties such as density and chemical composition affect the speed at which waves travel through the Earth.

The team examined more than 4,000 seismometers measurements of earthquakes from around the world.

In a process similar to a CT scan, the team then ran a complex mathematical process to unravel the data and build the most detailed global map of the lower mantle, showing features ranging from as large as the entire hemisphere down to 400 kilometres across.

The map showed the seismic speeds varied more than expected over these distances and were probably driven by heat transfer across the core-mantle boundary and radioactivity.

"These images will help us understand how convection connects the Earth's surface with the bottom of the mantle," said Associate Professor Tkalčić.

"These thermal variations also have profound implications for the geodynamo in the core, which creates the Earth's magnetic field."


The above story is based on Materials provided by Australian National University
Share to: