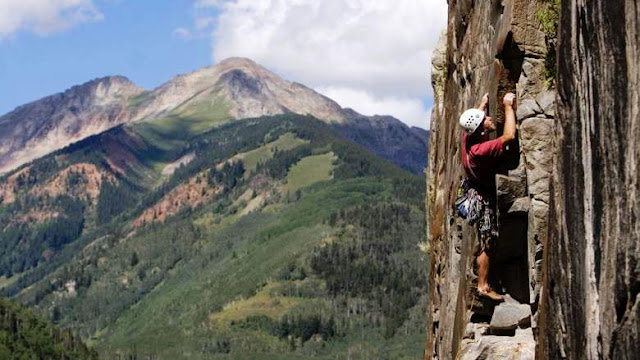 Climate change increases the danger of falling rocks in the Alps and other mountain regions, adding to existing risks for mountain climbers. This is the conclusion of a study by Arnaud Temme of Wageningen University using climbing guides written by mountaineers in the past.
Global warming causes thawing of permafrost and retreat of glaciers and snowfields. More rocks get exposed to the air, reducing their stability and increasing the chance of rolling or falling. After permafrost degrades, freezing and thawing in cracks and crevices start to alternate. Every time water freezes, it expands and lets the cracks grow slowly until the rock breaks. Higher temperatures lead to more instable rocks, increasing the risk of falling.
Old climbing guides
In his research Arnaud Temme of Wageningen University gathered information on safety of climbing routes from so called climbing guides. These guides are written by very experienced mountaineers that describe the climbing routes in a certain area, in this case the Bernese Alps in Switzerland.
In addition to climbing routes, information about risks of falling rocks is mentioned in the guides. For all routes, the type and orientation of the rock and an indication of all risks along the route are noted.
Until know there was little information available on the risks of falling rocks: the available data was on large, rare rock avalanches or for small slopes. However, in the climbing guides, multiple generations of climbers noted the climbing dangers for whole mountain ranges.
The oldest guide out of the dozens of guides used in the research was written 146 years ago. This allowed Temme to record the changes for a longer period and link these with climate change.
Forecast
Climate change does not enhance the risks in the mountains in an equal way, other factors play a role as well. Orientation of the slope is important to calculate the risks. East and west sides of a mountain appear to be more risky due to larger temperature swings. Risk also may be higher in places surrounded by rocks and on faces of granite and amphibolite.
This knowledge allows for forecasts: the properties of a specific area can give an indication of the risks involved. In the future, the collection of area properties can be processed into a map with high risk areas, even in mountain ranges where no research has been conducted. This way, historical knowledge contributes to forecasting of future risks in the mountains.
The above post is reprinted from materials provided by Wageningen University and Research Centre.
Share to: