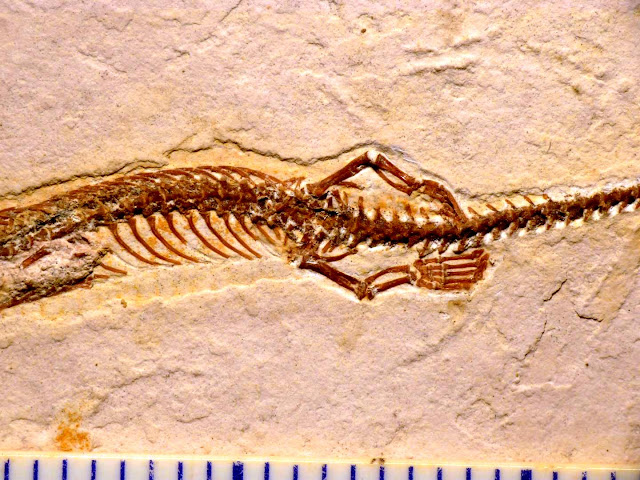 On an arid plateau in the Andes Mountains of southern Bolivia, a Case Western Reserve University researcher flagged what turned out to be the fossil remains of a tortoise nearly five feet long -- a find indicating this highland was likely less than a kilometer above sea level 13 million years ago.
Fossilized shell pieces of a much smaller, aquatic turtle found nearby support the altitude estimate and also indicate the climate was much wetter than today.
The remains are the first records of fossil turtles from the Miocene epoch in Bolivia, and their presence challenges a recent isotope-based study that estimated the massive plateau, called the Altiplano, near what is now the town of Quebrada Honda, was 2 to 3.2 kilometers high at that time.
In addition, the fossils provide a glimpse into climate change caused by rising mountains, which may help scientists understand climate change underway now.
The research is published in the Journal of South American Earth Sciences.
"We're trying to understand how tectonic plate activity and changing climate affected species diversity in the past," said Darin Croft, an anatomy professor at Case Western Reserve University School of Medicine and a paleomammalogist. "One way all this diversity we see in the South American tropics today was generated was through elevation. Mountains create many different climates and ecosystems in a small area, which promotes speciation."
Croft found the tortoise remains in an embankment after he missed a turn on a path near Quebrada Honda and was working his way back toward his regular research site. Croft and Federico Anaya, a member of the geological engineering faculty at Universidad Autónoma Tomás Friás in Posotí, later identified other, more fragmentary tortoise remains from other sites in the area.
After returning to the United States, Croft sent photographs and three-dimensional computer-generated images of the remains to Edwin Cadena, a turtle expert now at Yachay Tech University in Ecuador.
Cadena identified the tortoise as a member of the same genus as the Galápagos tortoise, Chelonoidis. He identified the extinct freshwater turtle as belonging to the genus Acanthochelys, whose surviving members occur throughout much of tropical South America.
The animals are ectotherms, commonly called cold-blooded. Their reliance on the outside air to control their body temperature can be used as a proxy for the temperature where they lived and, therefore, elevation.
The ancient tortoise and aquatic turtle most likely would have had physiological requirements much like their modern relatives, which generally live at altitudes of up to about 500 meters and can't thrive or reproduce at much higher elevations because of the cooler temperatures, Croft said.
Miocene fossilized leaf remains are scant in Bolivia, but those that have been found tend to support the findings of warmer temperatures, lower altitude, and greater precipitation than today.
The Andes were formed by subduction -- a process in which one tectonic plate is shoved under another. How quickly the mountains rose to their current elevation is not fully answered.
As the highest geological feature in South America, the mountain chain affects global air circulation patterns and plays a major role in global climate.
"With current global climate change, we'd like to have a better idea of what to expect under different scenarios -- how 1-degree warming or 2-degree warming will affect sea levels and animals," Croft continued. "If we want to model the future, we need to understand and model the past."
Looking back, if the Andes Mountains were less than 1 kilometer high during the late Miocene, they would have had a much smaller effect on global circulation than if they were two or three times as high, close to their modern elevation near Quebrada Honda.
The researchers believe they have more evidence from extinct animals that this part of the Altiplano was less than a kilometer above sea level 13 million years ago. They found fossil remains of a large snake in the same rock layer as the turtles. Those bones are currently under study by Croft and colleagues.
The above post is reprinted from materials provided by Case Western Reserve University.
Share to: