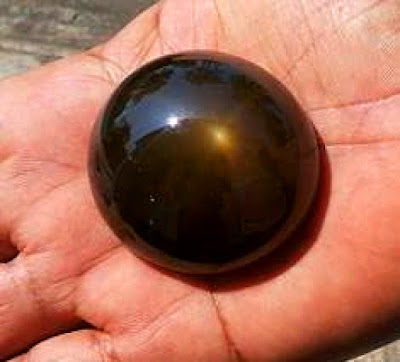 There is a high demand for Sri Lankan gems in the world. An exceptionally large gem stone belonging to the rare naturally radioactive Ekanite gem variety, has been found from the Welimada area. The newly discovered stone is over three times as large as the stone previously recorded as the largest Ekanite gem.

Information about this rare gemstone was revealed to the media in the Ratnapura area by a gemstone trader who had purchased it. The gemstone had been recovered from a granite quarry in the Welimada area. The founder had polished it after it was cut into seven separate pieces. It weighs more than 498 karats. The weight of the world’s largest polished Ekanite gem is said to be 168 karats. This gem too has been recovered from the Eheliyagoda area. It was in the year 1985.

The extremely rare Ekanite gem has so far been found in Russia, the United States, Canada and Sri Lanka. The fact that Ekanite gems are radioactive however, means that they cannot be subject to human use and must be stored in a safe and suitable place.The gem belonging to the ‘Star Ekanite’ family was cut and polished as a cabochon, and was upon examination issued a certificate of authenticity by gemologist Dr. DunilPalithaGunasekera.

Ekanite is named in 1961 after F.L.D. Ekanayake, discoverer of the mineral in 1953 in Sri Lanka. The material was dark, dull and green, but when it was polished as cabochons it revealed a four-rayed star.

Ekanite occurs in poorly formed prismatic crystals of straw-yellow colour when pure, sometimes dark red or brown colour, which is caused by inclusions. The largest crystals are 2 – 3 mm long and are tetragonal in symmetry.