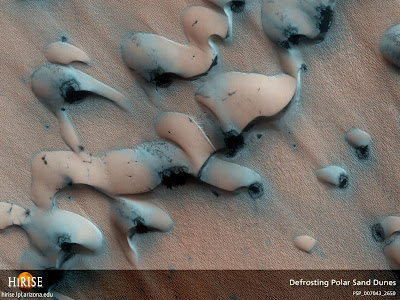 One day, most likely, humans will visit Mars and begin to unravel its geological history and even determine if anything once lived there.
Until then, though, scientists have employed all sorts of techniques to study Mars from afar, including launching orbiting satellites and dispatching rovers to scurry over its surface.
Despite these efforts, much remains unknown about Mars. So, how do you do hands-on research with a planet that's at minimum 34 million miles away? You seek similar places on Earth.
University of Iowa volcano specialist Ingrid Ukstins Peate has found a spot in Iceland that appears to be a pretty good stand-in for the sand dunes that speckle Mars. The associate professor in earth and environmental sciences nabbed a $501,000 grant from NASA to visit the site and learn more about the sand and soil there.
The goal is two-fold: One, get samples from the sand sheet and learn more about how ash and other particles that landed there from a nearby volcano have changed over time, especially from the effects of wind -- a common, persistent weathering agent on Mars. Second, Ukstins Peate and her team aim to learn whether the Martian-like sand dunes harbor microbial organisms, perhaps even some that may be long dormant.
That's important because if the UI-led team finds evidence that the sand sheets hosted -- or could have hosted -- life, it may present NASA with another option in future missions' search for life.

"On Earth, people have proposed that sand fields serve as 'bioreactors,' and things can live under the surface of that sand and survive," Ukstins Peate says. "So, if we identify areas on Mars that are wind-blown sand deposits in the same way, maybe it provides another opportunity to target the science of life on Mars."
In August, the team will head to Askja, a remote, cold, and windy expanse in the east-central region of Iceland. There, the researchers will take samples along the sand sheet created by the Askja volcano's past eruptions to learn more about changes in the sand's grain size, chemical composition, and shape. They hope that information from Askja will provide them with a better idea about the sandy environments on Mars and how they've changed.
"(Askja) looks barren, but it's beautiful at the same time," says Michael Sara, a master's student in earth and environmental sciences at the UI. "You have these lava flows popping out of the sand, sand blown everywhere. We're studying something that we believe to be very much like Mars, but we don't know for sure, and the only way we're really going to know is if we can get there and analyze it the way we're analyzing in Iceland now."
What scientists do know about Mars is that it's a cold, desolate place. Yet there are tantalizing clues that the Red Planet's climate was much more inviting in the past -- warm and wet, even -- with lakes, rivers, and other watery features we see on Earth. But that past is a mere geological whisper, and evidence of Martian life has proved elusive. Iceland's sand dunes could yield some valuable intel about Mars's geological history and where Martian organisms may have lived.
Sand sheets cover approximately 349,000 square miles of the Red Planet; if you put them together the state of Iowa could fit in six times over. The dunes also appear to have evolved similarly to those found on Earth, in that the original rocks have been deposited from somewhere else by volcanoes, oceans, rivers, etc. and then moved, shaped, and ground up by wind.
"The good thing about this study," Uskins Peate says, "is it's applicable to any time in Mars's history where you've had wind-blown material being deposited, which could be anywhere from the very first geological processes that were happening early on in Mars's history up until yesterday. There are winds and fine-grained material that are being blown around on Mars all the time. That process of wind-blown deposits forming is something that's been part of Mars's history for the entire time the planet has been geologically and environmentally active."
What also makes Askja special is that the sandy sediment -- some 30 feet thick in places -- is high in magnesium and iron, similar to the blackish sand dunes on Mars but rarely found on Earth. The team, including researchers from Brock University in Canada, the U.S. non-profit Planetary Science Institute, and the Nordic Volcanological Center in Iceland collected samples from Askja for the first time last summer. What they find on subsequent trips may write a new chapter in Mars's history.
"Why should we worry about studying sand on Mars?" Ukstins Peate asks. "For our understanding of the universe we live in. If there's the ability to figure out something basic about another planet using analogs from Earth, then I think it advances science in a really profound way."