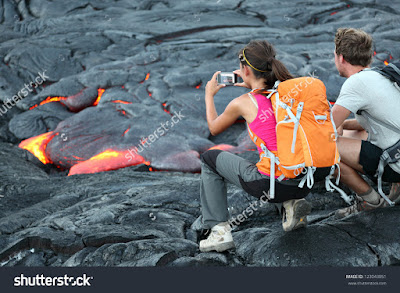 Centuries ago, a native Central American people terrified of a witch believed to live deep in the earth used to sacrifice children and young women to Nicaragua's Masaya volcano.

Today, the crater southwest of the capital Managua is an international tourist magnet, where photo-snapping visitors scramble among sulfurous fumes to get views of its bubbling lava—a rare sight.

The only volcanoes in the world to boast lakes of incandescent magma are Masaya, Hawaii's Kilauea and Nyiragongo in the Democratic Republic of Congo, explained a Nicaraguan geographer and environmentalist, Jaime Incer.

"It's something extraordinary, unique in the world," said Noheli Pravia, a French visitor filming and photographing the scene which has happened every 20 to 25 years since 1902.

The red-hot liquid performs an agitated ballet for the spectators, with a cloud of white smoke filling the active crater, whose name is Santiago.

Masaya volcano is located in the most populated part of Nicaragua's Pacific coastal stretch and is inside a nature reserve of some 50 square kilometers (20 square miles) where vast fields of petrified lava contrast with the white flowers of frangipanis.

"This is the first time I've seen something like this—it's really impressive," said Mijaela Cuba, an Austrian nurse, speaking above the waves of lava.

She was one of 4,000 tourists whom the Nicaraguan government has given permission to edge up close to the crater's edge in the past two weeks. Each visit is limited to just a few minutes because of the risk from the toxic gases.

The only signs of life in the walls of the crater, that go down hundreds of meters, are green parrots and bats. Masaya has erupted twice in recorded history: in 1670 and 1772, scaring the Spanish conquistadors.

"It is a maw of fire that never ceases to burn," the first governor of the region, Pedrarias Davila, wrote to the king of Spain in 1525. One monk, Francisco de Bobadilla, even considered it to be the gate to hell and erected a big cross on the edge of the crater.

The pre-Columbian people who inhabited the area believed that a subterranean witch they called Chalchihuehe lived inside, and they sacrificed young innocent lives to try to appease her.

According to Incer, the risk now is that, if the lava keeps rising higher inside the volcano each time it appears, a new eruption could occur within the next 150 years on the scale of the one in 1772—when it reached as far 30 kilometers away, where today stands Nicaragua's international airport.