Oklahoma rocked by one of its strongest earthquakes 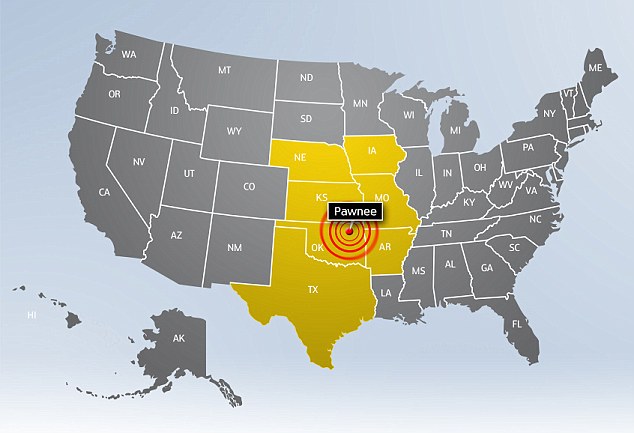 One of the strongest earthquakes ever recorded in Oklahoma rattled the area northwest of Pawnee on Saturday, fuelling growing concern about seismic activity linked to energy production, a federal agency said.

The magnitude 5.6 quake, which was felt from South Dakota to Texas, prompted the closure of some 35 wastewater disposal wells in the area, officials said.

It shallow quake struck 9 miles (14 km) northwest of Pawnee in north-central Oklahoma at 7:02 a.m. CDT (1302 GMT). Its 5.6 magnitude matched a 2011 earthquake for the biggest on record in the state, the U.S. Geological Survey said.

There were no immediate reports of injuries in Pawnee, where about 25 percent of the residents are Native Americans. Damage in the town appeared to be minor, and the Pawnee Nation declared a state of emergency for its area.

"You heard it before it happened," Pawnee resident Jasha Lyons Echo-Hawk said. "Watching my drawers all shake out and my headboard rattle, it felt like I was watching 'Paranormal Activity.' It felt like I was in a movie."

Pawnee Mayor Brad Sewell said the tremor lasted nearly a minute, far longer than previous ones that lasted only a second or two. Part of the facade of an early 20th-century bank building fell into a downtown street, he said.

The earthquake, which was only 4.1 miles (6.6 km) deep, could fuel concerns about the environmental impact of oil and gas drilling, which has been blamed for a massive spike in minor to moderate quakes in the region.

Oklahoma has been recording 2-1/2 earthquakes daily of magnitude 3 or greater, a seismicity rate 600 times greater than before 2008, the Oklahoma Geological Survey (OGS) said.

Oklahoma's economy is heavily dependent on energy production, which accounts for one of every four jobs in the state.

Oklahoma geologists have documented links between increased seismic activity in the state and the injection into the ground of wastewater from oil and gas production, according to a report from a state agency last year.

The drilling technique known as hydraulic fracturing, or "fracking," also generates large amounts of wastewater. The OGS report said fracking is responsible for only a small percentage of the total volume of injected wastewater.

Zachary Reeves, a seismologist with the USGS National Earthquake Information Center in Golden, Colorado, said the agency had received reports of the Oklahoma quake from South Dakota, Wisconsin, Kansas, Missouri, Arkansas and Texas.