This 2.3Kg Opal Is the Largest Black Opal in the World


Found over 10 years ago in Grawin Field, the present specimen of seam opal was left as close as possible to the natural state in which it was found. Polished by the artist who was then Australia's foremost opal carver, the late Christine Rousel. Her main intention was to only to reveal the main color bars through contour polishing and to leave the Opal as close to its natural state as possible--revealing its beauty which took over a million years to form.

Gem-like broad flash blue-green play-of-color is seen on this portion of the specimen, while fine iridescent green, blue and vivid orange pinfire play-of-color covers a large extent of the face. True black potch is seen to the reverse.

It’s name obtained directly from the miner, it was he who named the specimen “The Sea of Opal”. His inspiration was two-fold: the outline of the large raised blue patch of color in the center has a resemblance to a swimming fish and the green flash that is seen at the apex is reminiscent of seaweed. Yet the name also evokes the geology of the region in that the center of the Australian continent was once an inland sea, the mineralized waters of which were responsible for producing the opal which we so admire today.

Accompanied by a Gemstone Authentication Report no. AA47948, stating that the solid precious opal is natural and that it has not been treated or enhanced in any way other than by cutting and polishing. 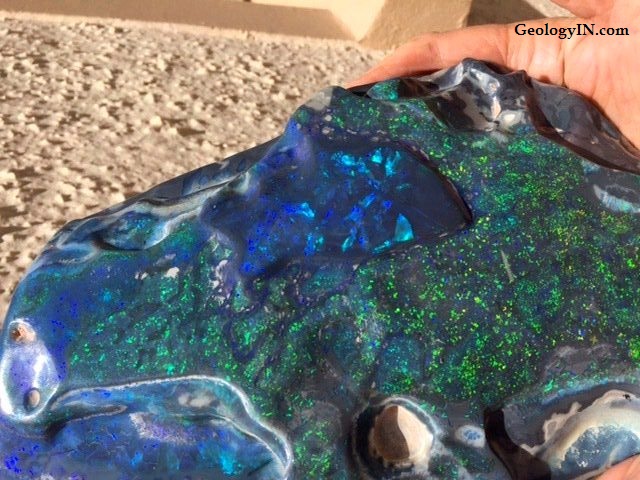