Where’s the center of North America? 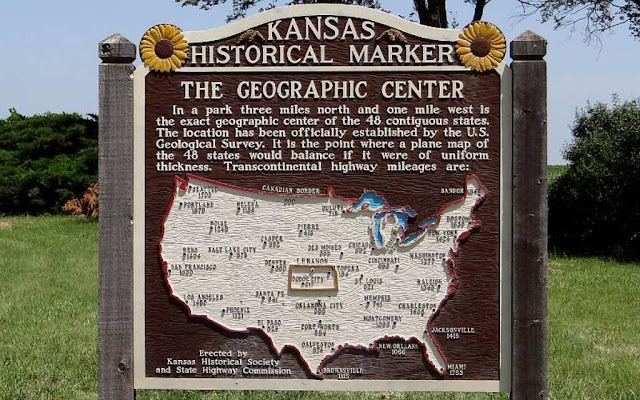 Where is the geographic center of a state, country or a continent?

It's a question fraught with uncertainty. Do you include water in your calculation? What about islands? What happens when the shoreline shifts?

The U.S. Geological Survey alluded to these complexities in a 1964 report on the centers of states, which opened by stating, "There is no generally accepted definition of geographic center, and no completely satisfactory method for determining it." More recently, various representatives of the agency have given quotes to newspapers saying much the same, hedging.

But to University at Buffalo geologist Peter Rogerson, PhD, the challenge of finding a middle doesn't mean you shouldn't try.

"There are all these people out there saying, 'There's no real good way to do this,'" says Rogerson, a SUNY Distinguished Professor of geography in UB's College of Arts and Sciences. He respectfully disagrees: "As a geographer, my feeling is that if we want to come up with a good way of defining a center, we can and we should."

In a 2015 paper in The Professional Geographer, an academic journal, Rogerson describes a new method for pinpointing the heart of a spatial entity. The approach improves on past techniques, he says, by taking the curvature of the Earth into account appropriately and by identifying geographic centers using a definition that's mathematically sound.

In late 2016, he employed his method to find the heart of North America. The result was serendipitous: According to his calculations, the center of the continent is in a place called Center, a town of 570 people in North Dakota.

An odd fascination with geographic centers

In his 2015 study, Rogerson recounts Americans' enduring interest in geographic centers, whether practical or not.

He writes that in the early and mid-19th century, county seats in the U.S. were routinely chosen based on their proximity to the county's center, a practice geared toward promoting accessibility. Today, some communities have erected plaques or other monuments attesting to their (sometimes questionable) status as the center of their states.

Recognition as a geographic center can generate tourist dollars and civic pride, as Rogerson writes in The Professional Geographer: "The associated attachments often run surprisingly deep -- deep enough for communities to do (usually good-natured) battle with each other and for journalists to run feel-good, public interest stories on what lies at the core of their region."

He's not sure why the idea of a geographic center is so intriguing to so many. But like a region's highest mountain or lowest point, the center is a landmark, however elusive, that seems to resonate.

"It's quirky. I think some people are just really interested in facts and the details of things," Rogerson says. "For some people, the obsession is sports statistics, and for some people, it's places."

Better than a cardboard cutout balanced on a point

One early method for finding geographic centers was balancing a cardboard cutout of a region atop a needle-like point, Rogerson says. Technology has come a long way since then, of course, and researchers have developed more precise techniques.

Rogerson says there is actually a solid, mathematical definition for what a geographic center is: It's the spatial equivalent of the center of gravity in physics, and its location minimizes the sum of the squared distances to all other points in a region.

Recent approaches to identifying geographic centers have varied, but one factor that has skewed some results is basing analyses on maps that fail to account appropriately for the curvature of the Earth -- a property that affects the true distance between two locations.

Rogerson's technique uses what geographers call an azimuthal equidistant map projection, which preserves important qualities related to distance when a rounded 3-D portion of the Earth is projected as a flat, 2-D surface.

Using this projection, paired with a computer program and a known mathematical formula for finding the centroids of 2-D polygons, he is able to narrow down a geographic center that meets the mathematical definition of what a center should be.

Of course, Rogerson has a small criticism of his own work: The azimuthal projection he's using assumes the Earth is a sphere, but really, the planet is slightly ellipsoidal. "It could always be more exact," he says.