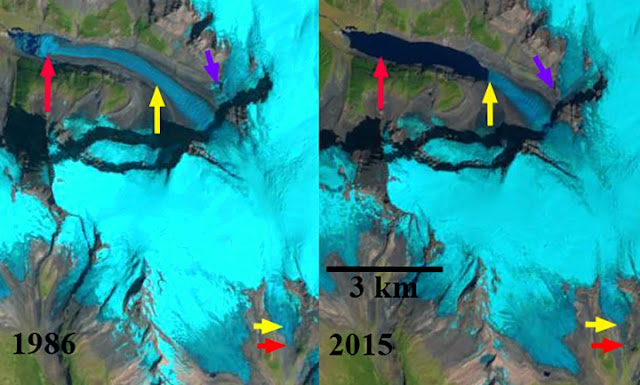 Comparison of Columbia Glacier, which is the glacier flowing into the lake at top in 1986 and 2015 Landsat images. The red arrow is the 1986 terminus, yellow arrow the 2015 terminus position and purple arrow the tributary.

The icefall leads to the creation of a series of ogives during the 1960-1990 period. Ogives are annual wave bulges that form at the base of an icefall due to differential seasonal flow velocity. Ommaney (2002) noted that the glacier advanced over one kilometer from 1966 to 1980 the glacier completely filled the large proglacial lake that now exists.

By 2015 the lake is 4000 m long indicating a 3000 meter retreat from 1986-2015. The rate of retreat has been less since 2004, 300 m, as the glacier approaches the upper limit of the lake basin. When the glacier terminus retreats to this step, the lake will no longer enhance retreat via calving and retreat rates will diminish. A further change is noted in the absence of ogives at the base of the icefall. As the icefall has narrowed and slowed the result has been a cessation of this process. The purple arrow indicates a tributary that joined the glacier below the icefall in 1986 that now has a separate terminus.

The current terminus is still active with crevassing near the active front. The snowline in both August 2015 and July 2016 is close to 2800 m. A more detailed look at the 2016 mass balance conditions in the region just west of the glacier suggest Columbia Glacier had a more negative balance than in the Columbia River basin.

With time left in the ablation season the snowline is at too high of an elevation to sustain strong flow through the icefall. The retreat is more extensive than the more famous and oft visited glaciers draining east from the icefield Athabasca Glacier and Saskatchewan Glacier.