Alaska volcano erupts for the second time this month sending a cloud of ash 35,000 feet high and prompting the highest possible aviation alert

The event, which took place on Alaska's Bogoslof Island, part of the Aleutian island chain, caused the issuance of a code "red" aviation alert, which was subsequently downgraded to "orange."

The cloud from the eruption reached at least 35,000 feet, and possibly as high as 45,000 feet, the observatory said.

"We actually went to color code red this afternoon because of numerous lightning detections and increased seismic signals," Jeffrey Freymueller of the Geophysical Institute at the University of Alaska, Fairbanks said.

The volcano sits under the flight path of many flights from Asia to North America and its ash cloud could adversely affect aircraft. "Ash and aircraft do not mix, as volcanic ash is abrasive, melts at jet engine temperatures, and can cause engine failure," according to the United States Geological Survey.


Aircraft are often instructed to fly around or over ash clouds, although in some circumstances air traffic has been grounded due to the hazards from airborne ash. In 2010 the eruption of the Eyjafjallajokull volcano in Iceland caused the cancellation of flights around Europe for six days.

The Federal Aviation Administration (FAA) last week said that flights were being rerouted around a similar ash cloud when the volcano previously erupted. 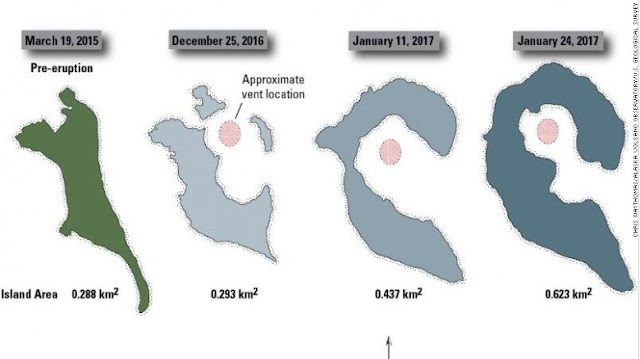 An image taken by AVO scientists around 14 minutes after the start of the eruption, from nearby Unalaska Island, showed a large white-gray mushroom cloud form over the site. Ash fallout was occurring to the west of the site, according to AVO.

Bogoslof volcano remains at a heightened state of unrest and in an unpredictable condition," according to a report issued by the Observatory, which added that "additional explosions producing high-altitude volcanic clouds could occur at any time."

It warns that continuing low-level activity could "pose a hazard in the immediate vicinity of the volcano."

Previous volcanic activity earlier in 2017 "significantly changed the shape and coastline of the island" and the land mass tripled in size between early 2015 and January of this year.

There have been eight documented eruption events at Bogoslof, the most recent one in 1992. Previous eruption events have lasted weeks to months, according to the AVO. This current eruption sequence started in December 2016.
Share to: