The Rarest Natural Element on Earth

It's so rare, there's just 30 grams TOTAL in Earth's crust.

Named after the Greek word for unstable (astatos), Astatine is a naturally occurring semi-metal that results from the decay of uranium and thorium. In its most stable form - astatine-210 - it's got a half-life of just 8.1 hours, which means even if you did happen to stumble on some of it, half of it would be gone by the end of a work day. Depending on how it decays, it'll either turn into the isotopes bismuth-206 or polonium-210.

This instability, combined with its actual scarceness, means that at any one time, there's less than 30 grams of it in the Earth's crust. If scientists need to use it, they have to produce it from scratch, that said, only 0.05 micrograms (0.00000005 grams) of astatine have been produced to date. No one's ever seen it in its elemental state, because if you had enough of it to see it with the naked eye, it would have already been vaporised by the heat of its own radioactivity.That said, scientists assume it would take on a dark or metallic appearance if you could see it. 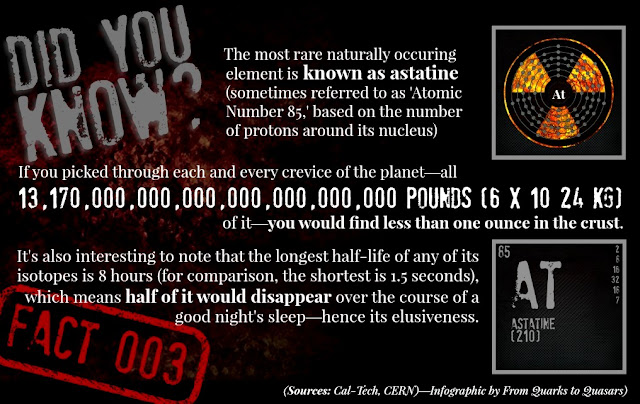 According to the guys at From Quarks to Quasars, who made the awesome infographic above, astatine is the rarest naturally occurring element that isn't a transuranic element. These strange elements are all the ones on the periodic table that have an atomic number greater than that of uranium - 92 - and they're super-unstable, decaying into a bunch of other elements.

So how can astatine be the rarest naturally occurring element if transuranic elements are technically even rarer? "Because the transuranic elements have half-lives much shorter than the age of our planet," says From Quarks to Quasars. "As a result, if any of these elements ever were present on Earth, they have long since gone, decaying into other things."

You know you need to get step away from the computer and get some sun when all you can think about is how poignant that sounds.


The above story is based on materials provided by  Quarks To Quasars.
Share to: