Mount Everest is NOT The Tallest Mountain in The World

The world's tallest mountain technically is not Mount Everest.

The secret of Everest’s height is not found at the summit but deep underground. Because of how it was formed it sits on higher ground.

Fifty million years ago, India’s continental plate crashed into Asia – the biggest collision on Earth in the last 400 million years. The collision was so violent that India’s plate did not just crumple, it pushed under Asia – raising the land mass high into the sky. 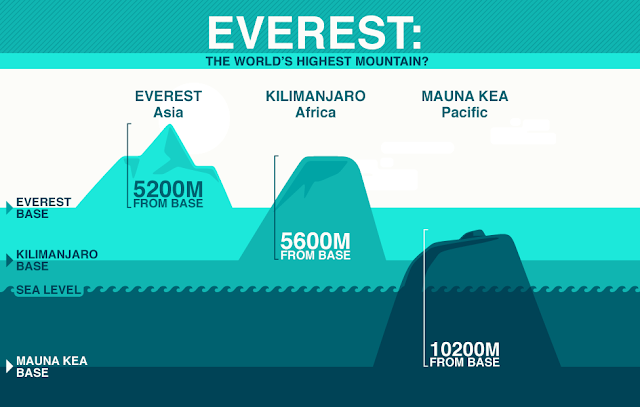 Everest stands 29,035 feet above sea level. Mauna Kea only stands 13,796 feet above seal level, but the mountain extends about 19,700 feet below the Pacific Ocean. Over half of it is submerged.

That puts the total height of Mauna Kea at about 33,500 feet — nearly a mile taller than Everest.

Mauna Kea is actually an inactive volcano on the big island of Hawaii. It is about a million years old, created when the Pacific tectonic plate moved over the Hawaiian hotspot — a plume of liquid magma from deep inside Earth. It last erupted about 4,600 years ago.