Gallium Is A Metal That Melts In Your Hands


Gallium is a soft, silvery metal used primarily in electronic circuits, semiconductors and light-emitting diodes (LEDs). It is also useful in high-temperature thermometers, barometers, pharmaceuticals and nuclear medicine tests. The element has no known biological value.

In nature, gallium is never found as a free element and cannot be found in a substantial amount in any minerals. Rather, it exists in trace amounts in various compounds, including zinc ores and bauxite.

Very pure gallium metal has a silvery color and its solid metal fractures conchoidally like glass. Gallium liquid expands by 3.1% when it solidifies; therefore, it should not be stored in glass or metal containers because the container may rupture when the gallium changes state.

Gallium shares the higher-density liquid state with a short list of other materials that includes water, silicon, germanium, antimony, bismuth, and plutonium.

The melting point of gallium allows it to melt in the human hand, and then refreeze if removed. The liquid metal has a strong tendency to supercool below its melting point/freezing point.

Gallium is one of the four non-radioactive metals (with caesium, rubidium, and mercury) that are known to be liquid at, or near, normal room temperature.

Of the four, gallium is the only one that is neither highly reactive (rubidium and caesium) nor highly toxic (mercury) and can therefore be used in metal-in-glass high-temperature thermometers. 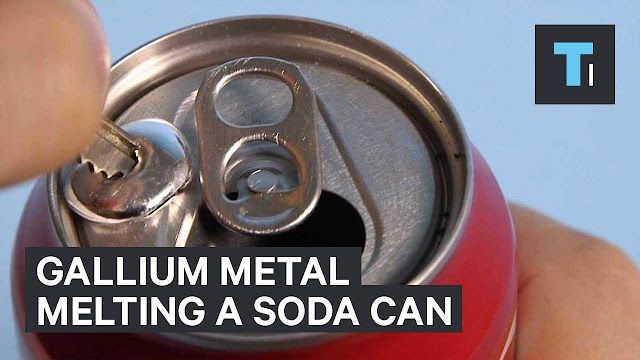 
Gallium does not crystallize in any of the simple crystal structures. The stable phase under normal conditions is orthorhombic with 8 atoms in the conventional unit cell. Within a unit cell, each atom has only one nearest neighbor (at a distance of 244 pm).

Gallium does not exist as a free element in the Earth's crust, and the few high-content minerals, such as gallite (CuGaS2), are too rare to serve as a primary source.


Points To Keep in Mind

How To Melt Gallium

What could be easier? Simply place the piece of gallium in the palm of your hand and let the warmth of your body heat do the work!


How To Melt Gallium

See also:
How Does a Trapiche Emerald Form?
Pleochroism in Tanzanite
How Do Asterism Minerals Form?
Share to: