New Clue for Fast Motion of the Hawaiian Hotspot 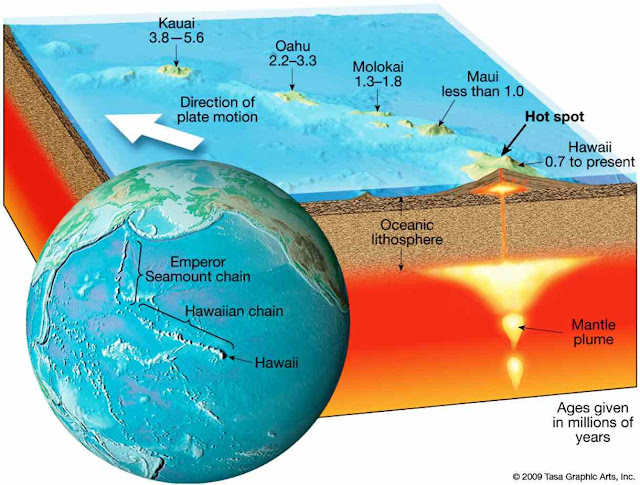 Geoscientists used to think volcanic hotspots were stationary. It helped us understand how tectonic plates - and continents - moved and where earthquakes lay. Now, evidence says they aren't stationary. Time to reassess?

The island chain of Hawaii consists of several volcanoes, which are fed by a "hotspot." In geosciences a "hotspot" refers to a phenomenon of columnar shaped streams, which transport hot material from the deep mantle to the surface.

Like a blow torch, the material burns through the Earth's crust and forms volcanoes. For a long time, it was assumed that these hotspots are stationary. If the tectonic plate moves across it, a chain of volcanoes evolves, with the youngest volcano at one end, the oldest at the other.

This concept was initially proposed for the Hawaiian Islands. They are the youngest end of the Hawaiian-Emperor chain that lies beneath the Northwest Pacific. But soon there was doubt over whether hotspots are truly stationary. The biggest contradiction was a striking bend of about 60 degrees in this volcanic chain, which originated 47 million years ago.

"If you try to explain this bend with just a sudden change in the movement of the Pacific Plate, you would expect a significantly different direction of motion at that time relative to adjacent tectonic plates," says Bernhard Steinberger of the GFZ German Research Center for Geosciences.

"But we have not found any evidence for that." Recent studies have suggested that apparently two processes were effective: On the one hand, the Pacific Plate has changed its direction of motion.

On the other hand, the Hawaiian hotspot moved relatively quickly southward in the period from 60 to about 50 million years ago -- and then stopped. If this hotspot motion is considered, only a smaller change of Pacific plate motions is needed to explain the volcano chain.

This hypothesis is now supported by work in which Steinberger is also involved. First author Kevin Konrad, Oregon State University in Corvallis, Oregon, and his team have evaluated new rock dating of volcanoes in the Rurutu volcanic chain, including, for example, the Tuvalu volcanic islands in the Western Pacific.

Furthermore, they added similar data from the Hawaiian-Emperor chain and the Louisville chain in the Southern Pacific. Based on the geography and the age of volcanoes in these three chains, researchers can look into the geological past and see how the three hotspots have moved relative to each other over millions of years.

The new data published in the journal Nature Communications shows that the relative motion of hotspots under the Rurutu and Louisville is small while the Hawaiian-Emperor hotspot displays strong motion between 60 and 48 million years ago relative to the other two hotspots.

"This makes it very likely that mainly the Hawaii hotspot has moved," says Steinberger. According to his geodynamic modelling the Hawaiian hotspot moved at a rate of several tens of kilometers per million years. Paleomagnetic data support this interpretation, says Steinberger.

"Our models for the motion of the Pacific Plate and the hotspots therein still have some inaccuracies. With more field data and information about the processes deep in the mantle, we hope to explain in more detail how the bend in the Hawaiian-Emperor chain has evolved."

The above story is based on Materials provided by GFZ GeoForschungsZentrum Potsdam, Helmholtz Centre.
Share to: