New Form of Carbon is Stronger Than Graphene and Diamond 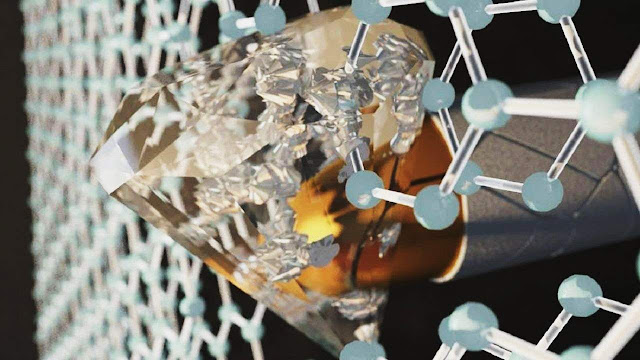 Some wonder-materials you hear from once, and that's it. But not graphene. A month barely goes by these days without us hearing about a new use for this amazing carbon allotrope.

Here's one more potential use for this overachiever of the molecular world – bullet catcher. One day armed forces might protect themselves with layers of a material called diamene; dual layers of graphene that respond to a force by deforming into an impenetrable diamond plate.

If you're not well acquainted with this material, imagine carbon atoms arranged in honeycomb pattern to form flat, chicken-wire-like sheets.

This arrangement gives carbon some amazing properties thanks to the fact each atom has three electrons firmly occupied in bonds, and one left free to wander about.

Once that fourth electron links up and joins the party, however, graphene becomes another famous member of the carbon allotrope family; diamond.

Many technologies make use of graphene's talent for conducting electricity with its loose electrons.

Other researchers roll it up into narrow nanotubes and make use of the material's mechanical properties.

In both cases, it's how graphene behaves as a flat, two-dimensional structure that's important.

Researchers from the Advanced Science Research Centre at the City University of New York have instead layered pairs of graphene sheets to create a material that turns into a three-dimensional diamond-like structure when smashed with enough force.

Sudden changes to the conductivity of the sheets when dented could present some interesting new electronic properties.

But it's the possible application as lightweight protection where it really gets interesting.

"This is the thinnest film with the stiffness and hardness of diamond ever created," says lead researcher, physicist Elisa Riedo.

"Previously, when we tested graphite or a single atomic layer of graphene, we would apply pressure and feel a very soft film. But when the graphite film was exactly two-layers thick, all of a sudden we realised that the material under pressure was becoming extremely hard and as stiff, or stiffer, than bulk diamond."

Right now graphene-based bullet-proof vests are the stuff of sci-fi, and will be for the time being.

The research was based on experiments and simulations that show it's theoretically possible to create diamene, and that squeezing makes the carbon bonds in its two sheets align into potentially useful configurations.

The researchers used atomic force microscopy to deform sheets of graphene grown on plates of silicon carbide, testing changes in their mechanical and electrical properties.

The team also demonstrated that adding more layers doesn't turn it into an even tougher sheet. Quite the opposite, this remarkable property only works when graphene is arranged in just two layers.

"Graphite and diamonds are both made entirely of carbon, but the atoms are arranged differently in each material, giving them distinct properties such as hardness, flexibility and electrical conduction," says chemist Angelo Bongiorno, who also worked on the research.

"Our new technique allows us to manipulate graphite so that it can take on the beneficial properties of a diamond under specific conditions."

Given how diverse its uses are shaping up to be, we can imagine graphene will play an increasing role in future generations of technology, both structurally and electronically.

Even if it's not protecting astronauts from zooming micro-asteroids or preventing Robocop's cybernetic brain from being shot, it's important to learn as much as we can about this material's amazing properties.

We still want our graphene armour, though.


This research was published in Nature Nanotechnology.
Share to: