What Is Pseudomorph Mineral? 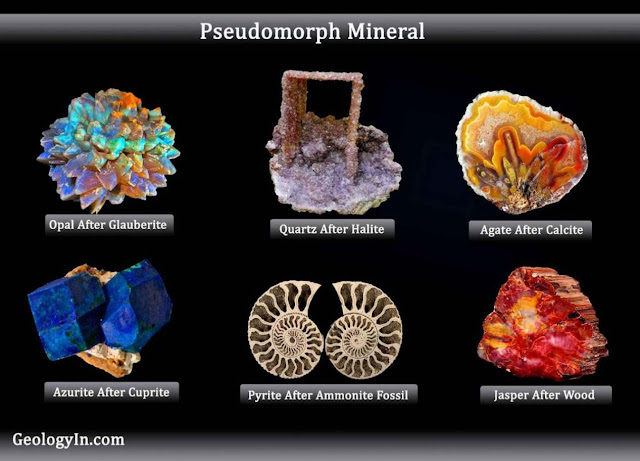 Pseudomorph, mineral formed by chemical or structural change of another substance, though retaining its original external shape. Although pseudomorphs give the appearance of being crystalline, they are commonly granular and waxy internally and have no regular cleavage; those that are crystalline have optical properties different from those required by their outward form.

A common example of this is petrified wood, in which all the cellulose fibres have been replaced by silica, even those in the bark. Pseudomorphs can be formed by deposition of one mineral on the surface of crystals of another (see also epitaxy).

Alteration pseudomorphs may be formed in several ways: from a change in internal crystal structure without a change in chemical composition (these pseudomorphs are called paramorphs; e.g., aragonite becomes calcite, and brookite becomes rutile); by the loss of an ingredient from the original compound (e.g., cuprite loses oxygen to form copper); by the addition of an ingredient to the original compound (e.g., anhydrite adds water to form gypsum, and cuprite adds carbon dioxide and water to form malachite); and by an exchange of constituents (e.g., feldspar loses potassium silicate and gains water to become kaolinite).

An example of this process is the replacement of wood by silica (quartz or opal) to form petrified wood in which the substitution may be so perfect as to retain the original cellular structure of the wood. An example of mineral-to-mineral substitution is replacement of aragonite twin crystals by native copper, as occurs at the Corocoro United Copper Mines of Coro Coro, Bolivia.


Read also:
Crystal Formations and Their Meanings
What Causes the Colour of Gemstones?
How to Identify Common Minerals?
Share to: