More Fissures Open Up Across Island After Kilauea Erupution 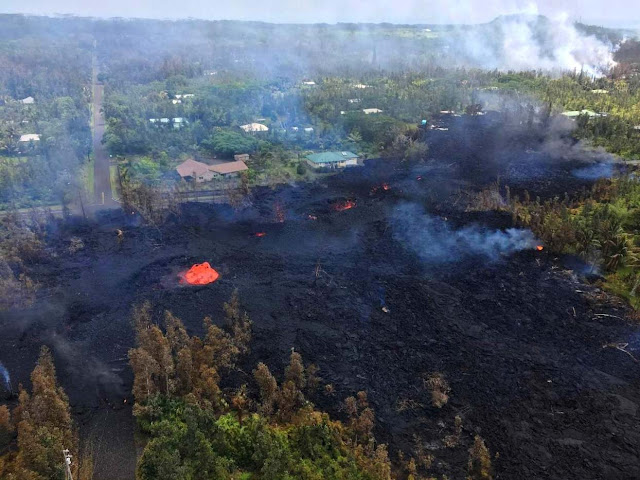 Active venting of lava and hazardous fumes continues between Mohala and Pomaikai Street.

USGS HVO says that fissure 8 erupted lava fountains until about 4 p.m., and the lava flow advanced slowly northward through the afternoon, even after the lava fountains shut down. Geologists reported that the flow crossed Hookopu Road early Sunday evening, a distance from fissure 8 of about about 1.1 km (0.6 miles).

Geologists also reported new ground cracks in the vicinity of fissures 8 and 9 that were emitting thick steam and gases, but no lava spattering was observed by the time of this status report.

Hawaii County said the lava burned more structures Sunday, bringing the total confirmed destroyed to 31. 26 of them are verified residences.

County officials are allowing Leilani Estates residents with property between Highway 130 and Maile Street to enter the subdivision to complete the evacuation of pets, medicine, and vital documents left behind.

Residents will be required to provide identification and proof of residency in Leilani Subdivision.

Residents of Lanipuna Gardens are not able to enter their homes due to dangerous volcanic gases.

"Vents continue to open up, so we lost a few more structures," Magno said on Saturday. "I'm pretty happy that we did evacuated the whole neighborhood and unfortunately some people are still in there and we need to get them out. The gases are still high."

"The officers and firefighters that were out there on the first night, the gasses were really high. Usually it's not long lasting. You can recover from it, but they went home with headaches and so forth, but that's part of the exposure," he said.

County officials are working on a plan to allow as many residents to return to their homes to retrieve additional belongings as possible, should conditions allow.

"We've been getting a lot of requests for this, and so we're going to try and make it happen," Magno said. "We've got to be careful, because the SO2 levels are still pretty high. There is a section in there that we won't be able to let people in, because there have been levels that aren't suitable. So the areas that have the lower levels, we'll try to get the residents in there so they can take care of stuff, but we're not going to let them stay. We still want them to come out.

"We gotta make sure we vet everybody as far as making sure that the actual residents or homeowners or renters are going in there and nothing else is happening," he added.

Meanwhile, the lava lake level at the summit of the volcano continues to drop.

There is no active lava in the Puu Oo area. Aftershocks from yesterday's M6.9 earthquake continue and more should be expected, with larger aftershocks potentially producing rockfalls and associated ash clouds above Puu Oo and Halemaumau Crater.

In the Leilani Estates Subdivision, fissure 7 was active for several hours on May 5 with large bubble bursts and spatter. A short lava flow moved northeast and crossed Hookupu St. https://t.co/hMQ8iOnbzi pic.twitter.com/KD0SAQ6VAF
— USGS Volcanoes🌋 (@USGSVolcanoes) May 7, 2018

Residents of the Puna District should remain alert, review individual, family, and business emergency plans, and watch for further information about the status of the volcano.

Puu Oo Observations: Seismicity remains elevated at Puu Oo but tiltmeters near the cone show no significant deformation overnight. No lava is active in the area and the 61g lava flow is no longer being fed. The summit crater of the cone will likely continue to collapse intermittently producing small plumes of ash. Yesterday, there were several vigorous episodes of ash emission in response to collapse, including immediately after the nearby M6.9 earthquake.

Hazard Analysis: Additional fissure outbreaks producing spatter and lava flows are likely. Locations cannot be forecast with certainty, but new outbreaks thus far have been preceded by ground cracking, then strong steam and volcanic gas release. Areas uprift and downrift of the current fissure zone are the most likely to see further outbreaks.

Areas downslope of an erupting fissure or vent are at risk of lava inundation. Currently, lava flows from active fissures are sluggish and not moving very quickly or far. The general area of the Leilani subdivision remains at greatest risk. However, as the eruption progresses, other areas of the lower East Rift Zone may also be at risk.

High levels of volcanic gas including sulfur dioxide are being emitted from the fissure vents. In addition, smoke from burning houses and burning asphalt is a health concern and should be avoided.

As the lava lake level inside Halemaumau drops, rockfalls from the enclosing walls may increase in frequency prompting explosions of spatter from the lake onto the nearby crater rim and lofting plumes of ash. Dustings of ash from these events can occur downwind. Yesterday's strong earthquakes were responsible for some of these plumes and associated ashfall, both from Kilauea Volcano's summit lava lake and the Puu Oo vent.