What Is Faden Quartz, and How Does It Form? 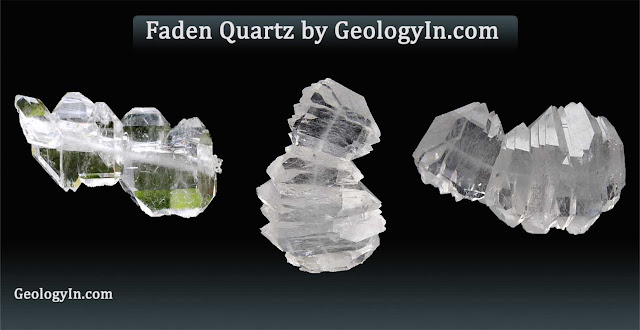 Faden quartz is a descriptive term for a usually tabular group of quartz crystals with a white thread-like or string-like zone running through the interior. The term faden is a German word for "thread". They are found in the Alpine region of Europe, Pakistan, Russia and Arkansas.

They are found in areas of low grade metamorphism in which cavities in the rock are growing. When these zones grow, the quartz crystals in them are broken (repeatedly), and the healing and regrowth incorporates fluid and gaseous inclusions ( the white threads). The edges of the crystals grow faster and incorporate the liquid inclusions in the center of the crystals.

Quartz crystals inside the host rock will rupture when the fissure opens. In a silica rich solution, this rupture will heal quickly, forming a crystal that is attached to the opposing rock walls and bridges the new opening. While the fissure continues to open steadily, the crystal will also continue to crack and heal. Because growth is much quicker on fractured surfaces than on regular faces and because it leads to small regular faces on the opposite conchoidal fracture surfaces that do not perfectly match, some of the growth solution is included in the crystal. The repeated rupturing and healing leaves a scar of liquid and gas inclusions in the crystal: a white thread, the "faden". In rare cases, the faden is covered by chlorite, which demonstrates beautifully that a now platy specimen did indeed start as a thin thread.

The thread can be seen best in crystals that grew parallel to the wall, because the speed of growth is usually larger along the crystals c-axis (from tip to tip). These faden quartzes usually assume a platy shape. Faden quartz crystals that grew perpendicular to the walls, so that the tips point to the rock wall, do not get platy. The thread is usually straight, but depending on the movement of the opposing rock walls, may also be curved, jagged or interrupted.


See also:
Types of Agate With Photos
The Major Varieties of Quartz (Photos)
Types of Mineral Inclusions with Photos
Share to: