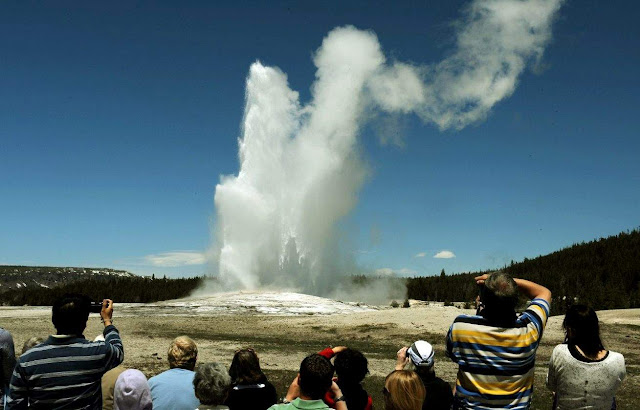 It was the talk of the boardwalk. Everyone had heard that there was an unusually active geyser at Yellowstone National Park in the Norris Geyser Basin, near the centre of the park. A sign close to the parking lot showed the way, and a quarter-mile later visitors hit the platform above Steamboat Geyser, wondering aloud whether it was the one.

Yes, it was, and although it was a little more than a day removed from its most recent major eruption, the world’s tallest active geyser was still something to see. Steam billowed out, soaring high above the trees. Water shot up intermittently, and the vents roared. Mist drenched one part of the boardwalk below, forming puddles. People pulled on hoods as they walked by.

John and Corri Kamphof, of British Columbia, reached the geyser fairly early that day. They’d never heard of it before coming to the park this year, but a ranger told them they had to go. When they arrived, they found it in the midst of what some consider a “big minor” eruption, one that shoots water as high as 100 feet.

“There was a lot of water,” John said. “It was really quite awesome.”

And it can get even bigger. Steamboat’s major eruptions are known to reach heights between 300 and 400 feet, sending gravel flying and soaking cars in the parking lot. The park has recorded 171 major eruptions of Steamboat since 1878, the year of its first known eruptions. But the big blasts are completely unpredictable.

One evening this past March, park employees reported seeing the first major eruption in nearly four years. Since then, the action hasn’t stopped. As of May 18, there had been five recorded major eruptions in 2018, already making it the busiest year for Steamboat since 1984. None of the five were as strong as the last two major eruptions, in 2013 and 2014, but the activity has people excited about the enormous feature.

Its awakening doesn’t portend the end of the world. However, scientists also don’t know why it suddenly woke up. That’s not so unusual either. Mystery isn’t unique to Steamboat. It’s the most normal thing about it.

All of Yellowstone’s hydrothermal features begin with rain and snow soaking into the ground. At a certain point, heat from the volcano’s magma reservoir forces the water to rise back toward the surface. The makeup of the underground plumbing system determines how the water expresses itself — whether it turns into a hot spring pool, a mud pot or a geyser.

Constrictions in the system create geysers. Water and steam get stuck in a tight spot, circling and searching for a way out, a vent to blow through. When the pair finds a path, it rockets into the sky.

About half of the world’s geysers are in Yellowstone, according to the park, and each one has a unique underground system.

“Each geyser kind of has their own personality,” said Jeff Hungerford, Yellowstone National Park’s lead geologist. “And it has to do with the plumbing and how the heat is expressing itself through the system until it comes to the surface.”

Old Faithful, the most famous geyser, is an anomaly. It draws enormous crowds each day in large part because of its consistency. Predictive systems are incredibly accurate, often within 10 minutes of an eruption. Signs posted in the area tell people when to grab a seat on the boardwalk. If a visitor misses one, they can probably see another in an hour or so.

That sort of consistency is rare.

“The vast majority of geysers do not erupt regularly,” said Jamie Farrell, a University of Utah professor and chief seismologist at the Yellowstone Volcano Observatory. “They are very irregular.”

Farrell said one of the reasons Old Faithful is so predictable is that it’s far away from other features in its basin, meaning it doesn’t share its water. Steamboat, meanwhile, has shown connections to nearby hot spring pools. For example, Cistern Spring, just two boardwalk switchbacks away, empties after Steamboat’s major blasts.

“Steamboat is kind of constantly fighting for heat and water,” Farrell said.

According to a park document, only two other now-dead park geysers have surpassed it: Excelsior, in the Midway basin, and Sapphire Pool, in Biscuit Basin. Another inactive geyser in New Zealand has also recorded eruptions higher than Steamboat’s, but it’s been dormant for more than a century.

Steamboat’s major eruptions come in two phases — water and steam. Farrell said the steam phase can last for weeks after a major eruption. The water phase, however, only lasts an hour or so.

Geologists track eruptions both by observation and by checking seismic records for major activity. Their records go back more than a century, and they show that Steamboat has had busy years, dull years and plenty of years where nothing much happens at all.

Major eruptions became far rarer after that stretch. Park officials recorded at least one in 9 of the next 33 years. The annual total didn’t surpass three again until this year.

Jake Young, the founder of GeyserTimes.org, a website that tracks geyser activity, said he knows a handful of people who have seen a major eruption of Steamboat in the 1980s. If you spent enough time trying back then, he said, you had a decent chance of seeing an eruption.

“That’s what we all hope Steamboat is going to go back to,” Young said.

A CHANCE TO LEARN

The fourth eruption came late on the night of May 5. Farrell was there about 12 hours later.

“At that time, it was in constant eruption,” he said. “It was erupting a lot of water.”

He was there to deploy 28 seismometers, devices that track ground-rattling activity. He’ll go back and pick them up later this year. They hope the seismometers can help them learn about how Steamboat’s acts both before and after big eruptions.

Fortunately for them, a week later, the fifth major eruption came.

“The geyser gods are smiling upon us,” Hungerford said.

This time of increased activity has given scientists a chance to try to learn something more about the geyser. Hungerford said they’re studying Steamboat’s connection to other features in the area besides Cistern Spring. Some have overflowed following the big eruptions, and they want to know more.

They’ve also put out a camera to try to capture eruptions on video. It’s hard to see because of the enormous amount of steam that the geyser emits, but that’s a problem Hungerford is happy to have.

“We are so thankful that it’s still erupting,” he said.